CHARLOTTE, N.C. - Saturday night's Sprint All-Star race will finish with a 10-lap sprint to the checkered flag, but the green flag for the event waves two days earlier at the pit crew competition according to Jeff Gordon.

Gordon, whose wins occurred in 1995, 1997 and 2001, is tied with Dale Earnhardt for most victories in NASCAR's annual non-points event. If he is to become the first individual to win the event four times, the driver of the No. 24 DuPont Chevrolet knows it will not be a singular effort. 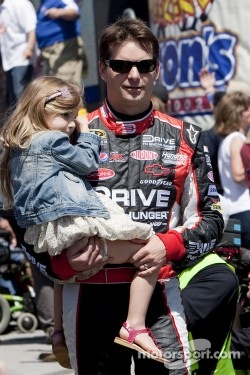 "This event takes a total team effort, and that's what I love about it," said Gordon. "We have the pit crew competition on Thursday night that determines the order we choose pits. On Friday, we incorporate the crew into qualifying so it doesn't matter if you have the fastest car on the track - it's about a total team effort for qualifying. And then there are mandatory pit stops during the race on Saturday night.

"This race - this whole week, really - shows which teams are strong, and I think that's really cool to have an all-star event like that."

With no championship points on the line, risks will likely be taken on - and off - the 1.5-mile track.

"That's another element to this race that makes it more exciting and interesting," said Gordon. "We're not racing for points, so it's all about the win.

Those risks can pay off Saturday night, and they can pay even bigger dividends later this year.

"Teams are more willing to try something different in this race," said Gordon. "If you hit on something with the setup, it may help you the following week in the '600' or later on this year.

"Those gambles are just another aspect of what makes this event so exciting.