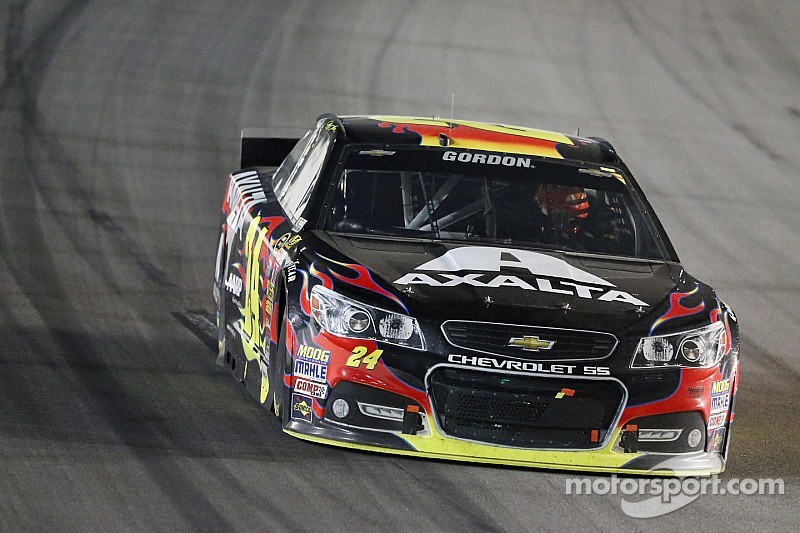 Jeff Gordon: “God! I finally had the restart of my life,”

INDIANAPOLIS—As he crossed the yard of bricks, and the significance of his fifth victory at Indianapolis Motor Speedway hit him like a ton of bricks, Jeff Gordon reveled in the moment that propelled him to victory in the Crown Royal Presents The John Wayne Walding 400 at The Brickyard.

“God! I finally had the restart of my life,” Gordon shouted into his radio mic, recalling the move just 15 minutes earlier that launched him past Hendrick Motorsports teammate Kasey Kahne on Lap 144 of 160 in Sunday’s marquee NASCAR Sprint Cup Series race.

Twenty years removed from his victory in the inaugural Brickyard 400, Gordon finished 2.325 seconds ahead of Kyle Busch who with teammates Denny Hamlin and Matt Kenseth finished 2-3-4 in the 20th Sprint Cup race of the season.

The win was the 90th of Gordon’s career, third-most all-time, his second of the season and, of course, his record fifth at IMS, breaking a tie with teammate Jimmie Johnson for most Cup wins at the Brickyard. The win also clinched Gordon a spot in the Chase for the NASCAR Sprint Cup, assuming he attempts to qualify for the remaining six races of the regular season.

And though open-wheel purists may blanch at the notion, Gordon is the first driver in any series to win five races on the legendary 2.5-mile oval that has played such an integral role in the history of motorsports in the United States.

“I’m not very good on restarts and wasn’t very good today, but I finally got the restart of my life today when it counted most,” said Gordon, who gave Chevrolet its 12th straight Cup victory at Indy. “Once I got clear, I was thinking like, ‘I can’t believe this is happening now...’

“I was trying so hard with 10 (laps) to go not to focus on the crowd,” added Gordon, who increased his series lead over teammate and ninth-place finisher Dale Earnhardt Jr. to 24 points. “Every once in a while, I’d glance up there and I could see the reaction. I was trying not to let it get to me and not think about it too much. And yet you can’t help it.

“It’s such a big place and such an important victory and a crucial moment in the season and the championship, and those emotions take over. I have my kids here. There’s nothing better, especially at one of the biggest races, to have your family here. ... This one is for all those fans throughout the years and all weekend long. They’re saying ‘We believe you can get number 5.’ We got number 5—yes!”

If Gordon had trouble believing the outcome, team owner Rick Hendrick did not. In fact, Hendrick had a premonition about the race.

“I told (Gordon) this morning, ‘This is your day,’ Hendrick recalled. “For him to break that tie (with Johnson), it’s pretty special. I remember the first one (1994) and how good it felt.

“This one feels just as good.”

Joey Logano ran fifth, and Kahne slipped to sixth in the final 17-lap run after leading 70 laps and, for most of the afternoon, looking to be the likely winner.

Kahne grabbed the lead from Denny Hamlin after a restart on lap 73, bringing Kyle Busch with him. For the next 24 laps, Kahne maintained an advantage over Busch that fluctuated between one and two seconds until Trevor Bayne’s No. 21 Ford spun and smacked the inside guard rail in the short chute between Turns 3 and 4 to cause the third caution of the afternoon.

Clint Bowyer, who had come to pit road moments before Bayne’s spin, had the luxury of staying out while other lead-lap cars stopped under yellow and led the field to green on Lap 102. Seconds later, however, Kahne retook the lead, and Bowyer soon slipped back to fourth behind Kahne, Busch and Gordon.

Busch surrendered second place to Gordon on Lap 113 and used the opportunity to duck behind the No. 24 Chevrolet and free a piece of paper debris that had attached itself to the grille of the No. 18 Toyota. Gordon quickly pulled away and began to close on Kahne, knocking a 2.6-second deficit to two car-lengths by the time Ryan Truex’s Toyota stalled on the track.

“Use one of the freaking exits,” Gordon screamed rhetorically on his radio, but Truex’s car came to a stop, and NASCAR had no choice but to call the fourth caution.

Kahne and Gordon led a large contingent that opted to stay out on the track under the yellow, but Kahne faltered on the restart, opening the door for Gordon to pass on the outside through Turns 1 and 2 as Kahne slipped back to fifth.

And that restart, as No. 24 crew chief Alan Gustafson had predicted during a quick interview before the final green-flag run, decided the race.

Problems for Hamlin in post-race inspection