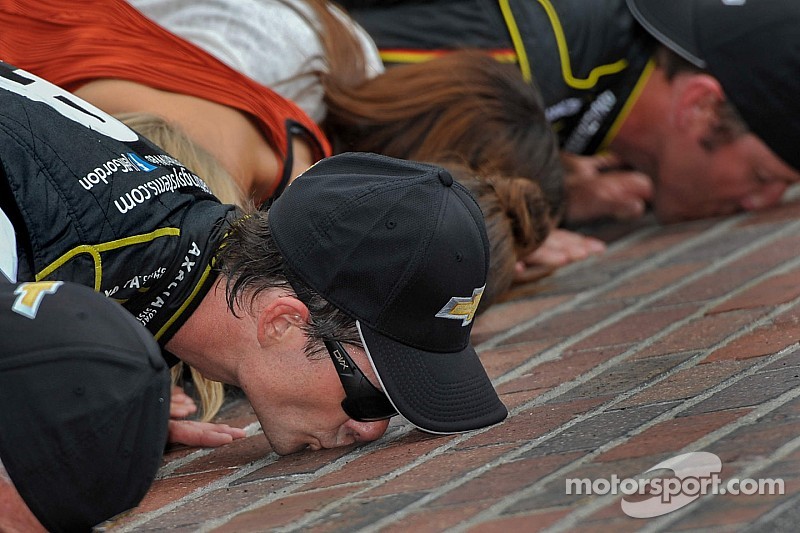 Jeff Gordon has done it. The four-time NASCAR Sprint Cup champion secured his 90th career win today at Indianapolis Motor Speedway. It marks his fifth victory in the Brickyard 400; a feat no other stock car driver has accomplished.

When you have that situation (teammates battling for the win), you just hope they don't wreck each other

"This one is for all those fans throughout the years and all weekend long," Gordon said. "They're saying we believe you can get number five. We got number five!" Gordon later added, "This team has rejuvenated me."

The winbreaks a tie he shared with Hendrick Motorsports teammate Jimmie Johnson, and elevates him to a tie with Michael Schumacher for the most victories in 'a major racing series' at IMS.

"I don't think there is a great feeling for a race car driver and a race team, because that's what it took today," Gordon said. "It was a total team effort to be here in victory lane. I'm exhausted."

The race was decided on a late-race restart with 17 laps to go. Jeff Gordon was able to power by teammate Kasey Kahne on the outside as Kasey fell to sixth in order to save fuel. Gordon ran away with it after passing Kahne, stalked by the fleet of JGR cars in second (Kyle Busch), third (Denny Hamlin), and fourth (Matt Kenseth). Joey Logano rounded out the top five.

Kahne took command just before the halfway point, when he got by Hamlin on a restart that followed the second caution of the race on lap 68 after Hamlin stayed out.

Looking back, I should have took the top (on that restart)

Kahne then lost the lead when the No. 15 Michael Waltrip Racing Toyota of Clint Bowyer timed a pit stop perfectly to be on pit road when the yellow flag waved for Trevor Bayne's crash on Lap 98. As soon as the race restarted however, Kahne retook the lead and Busch moved into second.

Kahne then gave up the lead to pit for the final time under green with 33 laps to go, handing the lead over to Gordon. The stops cycled through and Kahne was back in the lead, just barely ahead of Gordon. The two Hendrick teammates then waged an epic battle for the top spot.

The final caution was for Ryan Truex, who was limping around the track with no power. Gordon took the lead on th restart as Kahne gave up several positions after wobbling in turn one.

The pass for the win

"I'm not very good on restarts and wasn't very good today," Gordon said. "I finally made the restart of my life today when it counted most. I knew we had a great race car. We just needed to get out front. Kasey kind of hung back and I got a little ahead of him, and I had to back up and was able to stay on his quarter pand, and once we got down into (turns) one and two, I could hear him get loose."

Kasey Kahne admitted that he should have taken the outside but that it wouldn't have mattered anyway. He actually ran out of fuel exiting the final corner on the final lap.

Car owner Rick Hendrick added afterwards, "When you have that situation (teammates battling for the win), you just hope they don't wreck each other."