Fourth-generation racer Jeffrey Earnhardt and his famous uncle Dale Jr. discussed the Earnhardt name and the pressure that comes with it in this past week's edition of the Dale Jr. Download. 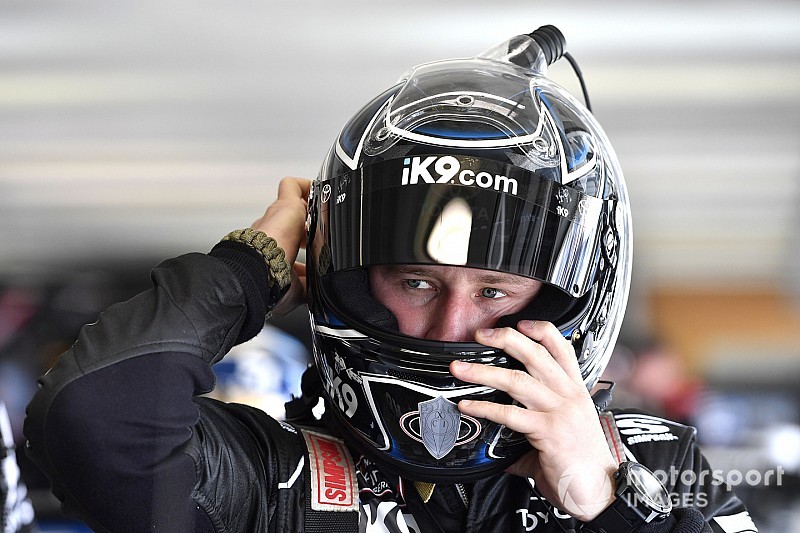 Jeffrey Earnhardt, the grandson of NASCAR Hall of Famer Dale Earnhardt, appeared on the Dale Jr. Download this past week with his famous uncle to discuss his current season, what lies ahead and the Earnhardt name.

“You are all over the place,” Dale Jr. said as they opened the conversation. The 30-minute discussion touches many topics including how Jeffrey has learned to utilize social media of late in order to connect with the fans, represent his sponsors better and show Earnhardt nation who he is.

An Earnhardt in a Toyota

But one particular question many Earnhardt fans still have is how the fourth-generation racer ended up in a Toyota.

Jeffrey explained that the relationship began last year when he drove a Toyota Camry for the Gaunt Brothers in select Cup races.

"Over the years, I’ve tried getting help here or help there from other manufacturers and I’m not knocking them but you know, I asked for help whether it was sim time or whatever, and never would get it. So I get this opportunity with Gaunt Brothers to drive a Toyota and they were like, alright let’s see if we can get you some sim time. Obviously I was like, psst probably not going to happen because it never worked in the past.

"They gave me sim time and then they started giving me notes and advice and all kinds of other stuff to help me develop as a driver. So to me, that meant a lot. Just the openness of them to give me the opportunity to develop myself and make myself a better driver meant a lot to me."

Looking ahead to 2019, he and his partners found themselves in conversations with Joe Gibbs Racing, which had nine races available in their No. 18 Xfinity Series car.

"When we were tossing around ideas like hey what do we want to do next," he explained. "We want to be a good ride, we want to have the chance to go win races. Obviously the Cup opportunities just weren’t there and I said alright, what better place than Gibbs? You got the Toyota relationship and you look at what Christopher Bell did last year and it was pretty impressive ... It’s just incredible what they have available for drivers thru TRD and Toyota."

Jeffrey led 29 laps in his first race with JGR at Daytona and placed a career-best of sixth at Atlanta the following week. But in 2020, he hopes to be full-time in the Cup Series with Extreme Concepts Racing, depending on sponsorship.

Past regrets and the Earnhardt name

Although they talked a bit about the future, the two Earnhardts also dove into the past when Jeffrey was "young and stupid" -- his words. He was regretful that he squandered the chance he had in DEI's equipment, admitting, "I wish I appreciated what I had more when I was at DEI. I was young and I was stupid. I didn’t understand what I had. I thought the streets were paved with gold man. I was like man, this is a walk in the park. And when DEI fell apart, I realized it wasn’t. I wish I had done things different, but at the same time it made me understand hard work and how these opportunities don’t come easy. I haven’t had the best opportunities in the past, but I’ve appreciated every one of them. It’s not easy to get a ride out there."

But the biggest challenge for Jeffrey? Something his uncle Dale can relate to and that's carrying the Earnhardt name. The family legacy is very important to the 29-year-old and apparently, just as important to their loyal fans.

“It’s incredible to see fans. Hell, this past weekend, I was just hanging out at the track (LVMS), but I ran into a lady that I ran into last year and she just bawled like crazy whenever I walked up and hugged her, and she did the same thing this weekend. So that speaks volumes and that’s cool to see, and that, to me, is what makes our last name so special and knowing what it means to other people. It’s kind of mind-blowing really.”

As for people at the other end of the spectrum who believe he didn't earn his way and say he's only here because of his name, Jeffrey says that he hears those criticisms "every day" before later adding, "at the end of the day, that don’t matter.”

But with that last name comes high expectations and Jeffrey has felt that pressure quite a bit as he struggled to find a competitive ride to showcase his abilities.

"Obviously, expectations are high, and people automatically assume just because of your last name, you’re going to win races. And unfortunately, wins don’t come that easy but I feel like because you grow up in it, you kind of understand how to channel that pressure and not let it sit on your shoulders. and I feel like I’ve been able to handle that pretty well and know that I’m cutting my own path.

Dealing with the pressure

But Jeffrey should get used to hearing the constant criticism because Dale Jr, a two-time winner of the Daytona 500 with 26 career Cup wins still hears them.

"Even after I retired, I still hear that I rode my dad’s coattails all the way through my career," said Junior. "It’s frustrating because, just like Jeffrey he’s had to work and there’s times when he’s had to sacrifice and do things differently than maybe his dad would have done or Papaw Dale would have done.

Listen to more of their discussion HERE.