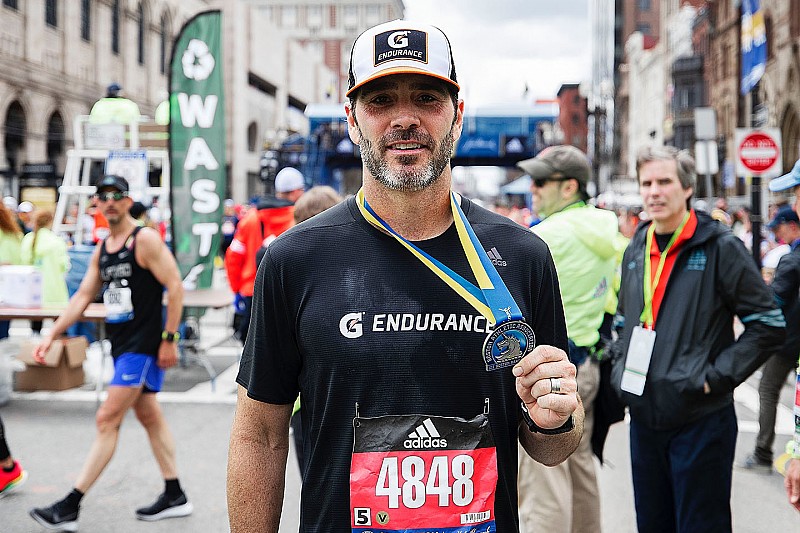 Jimmie Johnson completed his first Boston Marathon on Monday in what he described as "the most challenging thing I’ve ever done."

And just 36 hours earlier, he completed 400 laps of racing at Richmond Raceway where he placed 12th in the No. 48 Hendrick Motorsports Chevrolet.

The 43-year-old kept fans up to date on social media, showing his pre-run preparations and other images from the event.

"Out on the course to see everyone, the signs that were up, it was just the most incredible experience," he said in a video message after the event. "I thank you all for your support. My legs are junk. I can barely even walk right now but it was worth (it)."

And unlike while behind the wheel of the race car, X the fans cheering him on as he was recognized by those in the crowd. "That was my big takeaway, how many people did spot me," he told a media scrum at the event. "It was loud, especially the closer we got to town. Once somebody would recognize me, the crowd would get going and I would kind of egg them on."

Johnson also expressed a desire to return next year with the goal of breaking under the three-hour mark.

He said of returning: "I would love to try to break three (hours). I don't think it was in the cards today. I left on that number and was trying to hold it, and just didn't have it. So need to go back and try more but I love that kind of challenge and it's going to weigh on me."

The other side of Alex Bowman - Part 4

Truex said it felt like "driving on snow" at Richmond finish