Jimmie Johnson has now won three of the last four races; making him the first driver to win three times in 2014. His victory at Michigan marks his first in 25 attempts at the circuit. He was able to hold off Kevin Harvick, who mounted a late-race charge but failed to reach the No. 48 after disposing of both Menard and Keselowski.

"They've been so good here at Michigan and couldn't close the deal," Johnson's car owner Rick Hendrick said after the race.

It was the fifth­ consecutive win for Hendrick Motorsports this year, with Johnson winning three of the last four.

The race was put behind the pace car eight different times including two in immediate succession to kick off the race. Brian Vickers and Travis Kvapil wrecked out of the event on the opening lap and then half a lap into the following restart, a multi-car accident ensued between Kyle Larson, Kasey Kahne, Ricky Stenhouse Jr., and Martin Truex Jr. While Kahne and Larson would rebound for solid results, Stenhouse, Truex, and Vickers were forced to leave Michigan disappointed

"We've always talked about winning here and been so close," Johnson said. Johnson got the lead after staying out during the eighth and final caution of the race that came out for debris on lap 147. After staying out, he restarted second to Jamie McMurray. He quickly moved out in front of the No. 1 car however.

Previous race leaders, Harvick and Joey Logano pitted under caution, along with several others, and restarted behind the handful who opted to stay out. Johnson was among the 'stayed out contingent,' thus making his final green-flag pit-stop long before many of his rivaks.

"Strategy always comes into play (at Michigan)," Keselowski, who pitted under the final caution, said.

After pitting with 35 to go, Johnson ran outside the top five, but as other drivers hit pit road in the final 20 circuits, Johnson gradually moved closer and closer to the front. He was back on point with just nine laps to go.

"As those laps wound down at the end, I was wondering what would happen," Johnson revealed. "Fortunately, nothing happened." 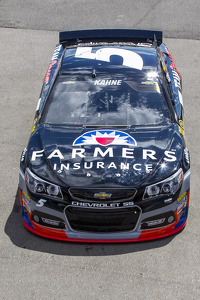 Paul Menard finished fourth and Kasey Kahne was fifth. For Menard, it was a great showing to cap off a weekend where he won his first Nationwide race since 2006 on Saturday. As for Kahne, he fought hard for that fifth place result after an early spin put him a lap down.

"We really needed that," Kahne said. "We had a lot of adjustments; it took us about (90 minutes) to get the car right. It was a battle."

Harvick and Gordon controlled the race early on with Harvick leading the opening laps before Gordon took over around lap 25. Harvick responded and was back in control by lap 60.

Johnson led the race for the first time after taking two tires during the third caution of the race that came out on lap 72, but his lead was short-­lived as Logano passed him by. Just as the event reached the halfway point, the No. 48 reasserted itself as the car to beat.

Jeff Gordon and Dale Earnhardt Jr. finished sixth and seventh to put all four HMS entries in the top ten at the end of the day. The No. 42 of Kyle Larson finished eighth (highest rookie), Joey Logano ninth, and Clint Bowyer rounded out the top ten for MWR.

Rookie Justin Allgaier brought home the best result of his young career in 16th. Juan Pablo Montoya finished 18th in his return to NASCAR this weekend, driving for Team Penske.

Kyle Busch finished back in 41st after he broke a left rear hub partway through the event while running sixth. His teammate Denny Hamlin also had a poor showing after a spin with Aric Almirola. Austin Dillon had a promising day going until a late-race tire failure spoiled what could have been a top fifteen, or even top ten result for the ROTY contender.

NASCAR now prepares for their first road course event of the year at Sonoma Raceway, located in Southern California.

Chevy NSCS at Michigan One: Post race notes and quotes