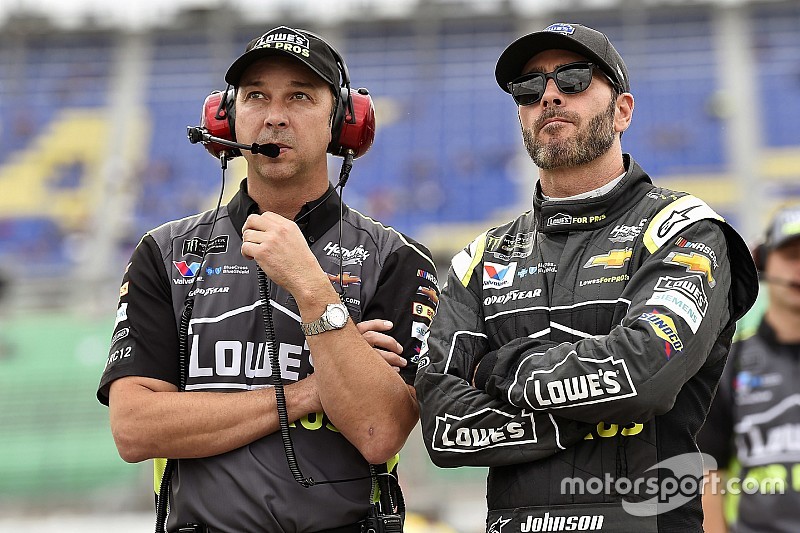 The longest-running NASCAR Cup Series driver-crew chief pairing will come to an end at the conclusion of the 2018 season.

Hendrick Motorsports announced on Wednesday that seven-time Cup series champion Jimmie Johnson will have a new crew chief of his No. 48 Chevrolet team beginning next season, ending his nearly 17-year relationship with Chad Knaus.

Knaus will move to the No. 24 team in 2019 and assume crew chief duties with current rookie William Byron. Knaus will replace Darian Grubb, who will be promoted to technical director, an executive leadership role supporting HMS’ engineering and vehicle development resources.

Replacing Knaus on the No. 48 will be Kevin Meendering, who currently serves as Elliott Sadler’s crew chief in the NASCAR Xfinity Series at JR Motorsports.

“It’s no secret that Chad and Jimmie have experienced their ups and downs over the years. They’re fierce competitors, great friends and have immense respect for one another,” team owner Rick Hendrick said. “They also fight like brothers. All three of us agree it’s finally time for new challenges and that a change will benefit them and the organization.

“Chad and Jimmie will go down as one of the greatest combinations in sports history. They defied the odds by performing at a championship level for longer than anyone could’ve possibly imagined.

“What they’ve accomplished together has been absolutely remarkable and will be celebrated for generations. This has been an incredible, storybook run.”

Together, Johnson and Knaus have 598 career starts in the Cup series, with 81 wins, 219 top-five and 346 top-10 finishes and have won 35 poles in addition to the seven series championships, including a NASCAR-record five in a row at one point.

Johnson, 43, qualified for this season’s playoffs but was eliminated following the Round 1 cut-off race at the Charlotte Roval two weeks ago. He is currently immersed in a career-worst 53-race winless streak dating back to last June at Dover, Del.

Hendrick said Meendering is “the right fit for Jimmie at the right time.”

“With an established No. 48 team behind them, I believe they will perform at a winning level next season and chase that eighth championship,” he said.

Byron, 20, is in his first season in the Cup series. He is currently 22nd in the series standings and has three top-10 finishes in 30 starts. He is a four-time race winner and former champion in the Xfinity Series (2017) and a seven-time race winner in the Camping World Truck Series.

“Chad has the ‘Rainbow Warriors’ pedigree and truly appreciates the history of the No. 24,” Hendrick said. “I’ve asked him to build another winner and given him the green light to put his stamp on the team and do it his way.”

“As an organization, we are here to win races and compete for championships,” he said. “Everything we do comes down to putting our people in the best possible positions to further that objective.

“Winning is what it’s all about.”