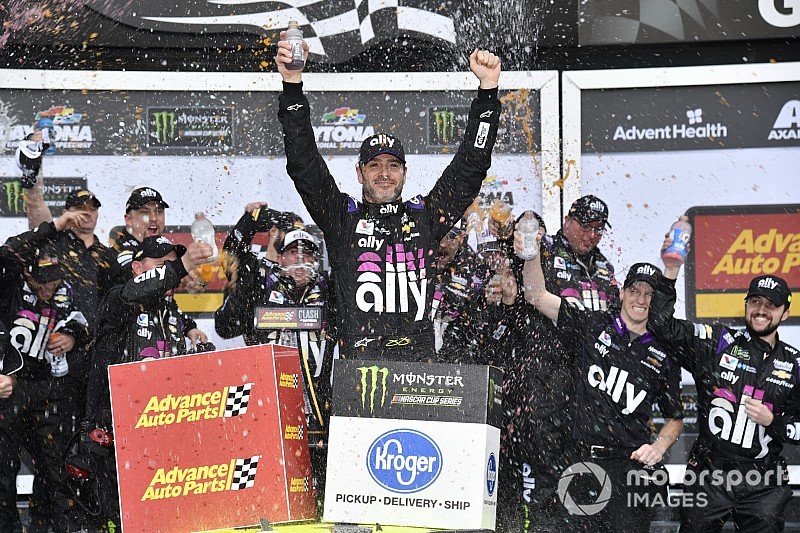 Jimmie Johnson ended his streak of wrecking out of the Daytona Clash but not wrecking in the race.

Running second behind leader Paul Menard on Lap 57 of the scheduled 75, Johnson moved to the inside in an attempt to pass just as Menard appeared to begin a move to block.

The two made contact, with Menard spinning and hitting the wall and the chain reaction collected all but a handful of the entire 20-car field.

Shortly after the incident and before the race could return to green, heavy rain covered the track again and brought an early end to the race.

“It was really just a racing thing,” Johnson said. “I was going down into Turn 1 and it was looking darker and darker. I saw my move and I had to take it.”

The win was Johnson’s first victory in over a year of any kind, although it doesn’t count in the Cup series standings. Earlier in the day Johnson’s teammate, William Byron, won the pole for next weekend’s Daytona 500.

Asked to go through the incident, Johnson said: "I knew the rain was coming, so I was trying to set-up my move and make my run on the No. 21 car. I had it kind of set-up down the backstretch a few laps prior to that and then my opportunity came along, I made that move to the inside and then we kind of got together.

"I’m not sure if just the air breaking his bumper plane pulled his car over or if he was late to block, but it was just really a racing thing honestly. So, I made my move and unfortunately he got sideways and it collected a bunch of cars.”
Johnson said he was still happy to begin the new season with a victory.
“It feels good - a great day for Hendrick Motorsports, for Chevrolet, for Ally coming on board and qualifying third for the Daytona 500 and then to win the Clash," he said. "Kevin Meendering (crew chief), leading this team; there have been a lot of things going on. I’m extremely excited to win. It’s not a points race, but it’s a good start.”

Rounding out the Top 10 were Austin Dillon, Elliott, Almirola, Newman and Suarez.

The race reached the halfway point on Lap 38 with weather continuing to threaten and Menard still out front followed by Hamlin and Keselowski.

Caution for rain was displayed on Lap 41. The race was halted on Lap 44 as the rain picked up. After an eight-minute delay, the race returned to caution.

Menard continued to lead the way when the race returned to green on Lap 48.

With 25 laps remaining, Johnson had moved up to second behind Menard with Kurt Busch running in third.

Austin Dillon claimed the victory in the first 25-lap segment as several drivers elected to pit prior to its conclusion.

Kyle Busch grabbed the lead on the first lap only to see Menard, who started from the pole, reclaim it a lap later.

Seven laps into the first segment, NASCAR displayed the caution when rain was reported around the track. Menard led the way followed by Keselowski and Bowman as the red flag was displayed after nine laps.

Many of the cars elected to pit prior to the break between the first two segments.

Both Elliott and Hamlin had to start the race from the rear of the field as both teams had moved to backup cars.

Menard blames Johnson for huge wreck: “Jimmie does that a lot”

Brad Keselowski has no desire to leave Penske