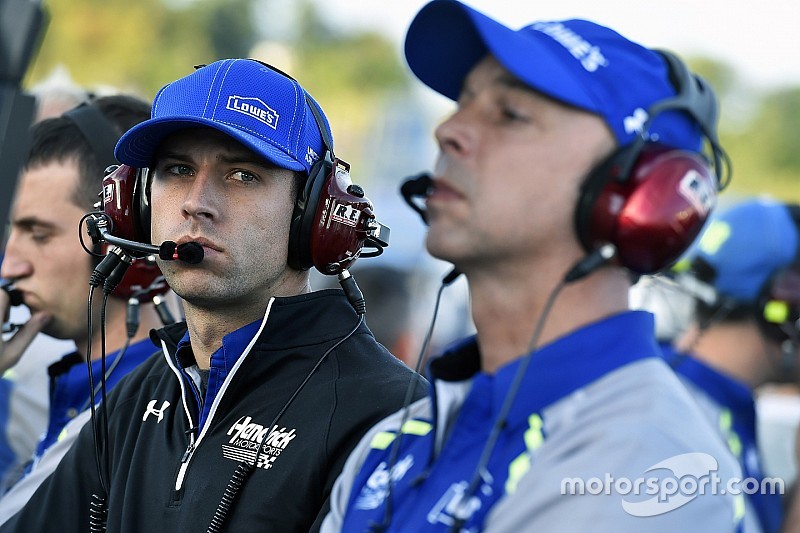 Cliff Daniels will lead the No. 48 team starting this weekend at Watkins Glen International.

After finishing 15th on Sunday at Pocono Raceway and still winless in 2019, Hendrick Motorsports has decided to make a change at crew chief for Jimmie Johnson.

Cliff Daniels is now the new crew chief for the seven-time NASCAR Cup Series champion and the No. 48 Chevrolet Camaro ZL1 team. Daniels will assume the role immediately and be atop the pit box for Sunday’s road course race at Watkins Glen International.

Daniels will replace Kevin Meendering, who will remain with Hendrick Motorsports in a senior competition role. Meendering joined the No. 48 team following the 2018 season.

“Kevin is a talent,” Hendrick said. “We have areas where he can make a major impact and help all four of our teams be successful. Everyone thinks the world of him, and we plan to keep him as a key member of our organization for as long as he wants to be here.”

Through 21 races in 2019, Johnson, 43, has one pole position and eight top-10 finishes including three top-fives.

“Cliff has really shined since he came back to the ‘48,’” Johnson said. “When he returned, there was an immediate change in the team dynamic that all of us felt. We’ve worked together for a long time, have a ton of mutual respect and a shared vision. I have no doubt the strong connection and working relationship is going to pay dividends right away.

“I’m so grateful to Kevin. He’s a truly awesome person who I think very, very highly of. I’m looking forward to continuing to work with him in his new role. He’s a brilliant guy and will make all of us better.”

Daniels is a former stock car driver who raced late models in and around Virginia at tracks like Langley, Southside and South Boston. After earning a mechanical engineering degree from the University of North Carolina at Charlotte, he was hired by RAB Racing in 2011.

He was a race engineer for driver Tony Stewart at Stewart-Haas Racing for two seasons (2013 and 2014) before joining Hendrick Motorsports.

“We have an opportunity to win an eighth championship and a lot more races with Jimmie,” Daniels said. “I’m proud to be in this position and have total faith in the team and our ability to perform at the level everyone expects. We have the best driver, the best organization and the best leadership, so everything we need to be successful is in place. It’s always been my goal to become a crew chief, and I’m thankful to Mr. Hendrick for his confidence.”

Why Ken Block matters. A lot.