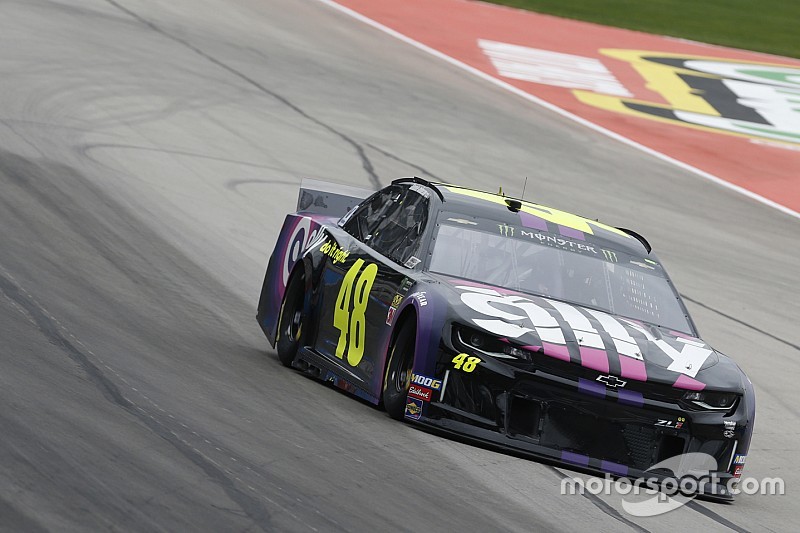 Jimmie Johnson is back – at least on the pole of a Monster Energy NASCAR Cup Series race.

In another interesting Cup series qualifying experience, Johnson swept all three rounds and his average lap speed of 188.890 mph earned him the pole for Sunday’s O’Reilly 500 at Texas Motor Speedway. But the staging system in pitlane caused consternation ahead of the qualifying runs.

It’s Johnson’s first pole since 2016 at New Hampshire and the 36th of his career. The pole was somewhat of a surprise as Johnson – a nine-time winner at Martinsville – was coming off one of his worst performances at that track.

“It’s been a long couple of years and we still have a ways to go and certainly race day is much more important than Friday,” Johnson said as his former crew chief Chad Knaus congratulated him.

“We’re working so hard and I think we’re a bit guilty of trying too hard and maybe stepping outside of our comfort zone at times and putting set-ups on the car that just quite aren’t proven yet.

“With all that said, we were very aggressive coming here, changed a lot of stuff around on our mile-and-a-half program. Top of the charts all day long. It’s a great start. I’m really proud of everybody keeping the faith and working hard.”

Suarez and Jones both went out alone during the final round while the remaining 10 cars elected to wait until just over one minute remained on the clock to attempt their qualifying runs.

Johnson again topped the leaderboard in the second round, even though he nearly ran out of time before completing two laps before time expired.

Suarez was the first driver to take to the track in the second round with just over three minutes remaining and completed his attempt with no drafting help and still ended up fourth-fastest.

Johnson, who was fastest in Friday’s practice, led the way in the first round of knockout qualifying.

Rounding out the Top 10 were Suarez, Elliott, Newman, Hemric and Almirola.

Among those who failed to advance to the second round were Clint Bowyer, Matt DiBenedetto, Ryan Preece and Kurt Busch.

With about three minutes, 50 seconds left, Bowman got into the Turn 2 wall, which brought out a caution. His team immediately brought out a backup car, which means he will have to start Sunday’s race from the rear of the field.

“There’s not much room for error when you’re running wide open around this place,” Bowman said.

Most cars waited until there was just over five minutes remaining before they made their first attempt to make qualifying runs.

Timmy Hill, Landon Cassill and Paul Menard were all penalized during the session for speeding on pit road.

Jones’ No. 20 Toyota failed pre-qualifying inspection twice, which resulted in the car chief being ejected from the remainder of the weekend. Jones will also lose 15 minutes in Saturday’s final practice.

Kevin Harvick: “I’m not getting out of the race car"