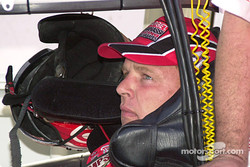 "We're excited about Jimmy coming on board, because he's one of the finest competitors in our sport," Smith said. "The excitement he brings on and off the track is something our sport thrives on, and having Spencer as the driver and Tommy Baldwin as the crew chief will make for a good combination for Ultra Motorsports and Sirius Satellite Radio. We're certainly looking forward to the 2003 season."

Baldwin was named crew chief of the No. 7 team on Nov. 19. The Bellport, N.Y., native is a three-time winning crew chief in the NASCAR Winston Cup Series, most recently in the 2002 Daytona 500 with driver Ward Burton.

Spencer, likewise, is familiar with Victory Lane. He captured a pair of wins during the 1994 campaign at two of racing's most prominent stages -- Daytona International Speedway (Pepsi 400 on July 2) and Talladega Superspeedway (Diehard 500 on July 24). The Berwick, Pa., native also has 12 NASCAR Busch Series wins to his credit, most recently last year in the Food City 250 at Bristol Motor Speedway.

"I can't begin to tell you how excited I am about being a part of this team," Spencer said. "Jimmy Smith has been a NASCAR supporter for years. His truck teams have been very successful, and I expect the No. 7 team to be no different. I'm very excited about this opportunity with Tommy Baldwin as the crew chief, Mike Ege building the engines, and Sirius Satellite Radio sponsoring the car. We've got a chance to do big things this year."

The combination of Spencer, who is known to the racing world as "Mr. Excitement," and Baldwin will be a headliner for the 2003 season, which will begin with Daytona Speedweeks Feb. 8-16.

"Tommy and I have been good friends for 20 years," Spencer said. "I think back to the modified days when I raced against his dad in the late 80s. Tommy was the crew chief for his dad, and one of the biggest races they ever won was at Riverhead Speedway in Long Island. I came in as the national champion, but they flat beat me. That opened my eyes with Tommy, and I gained a lot of respect for him. He's one of the best around."

The 2003 season will be Spencer's 15th in the Winston Cup Series. With his two career wins also come four Bud Pole Awards, 27 top-five finishes and 76 top-10s.