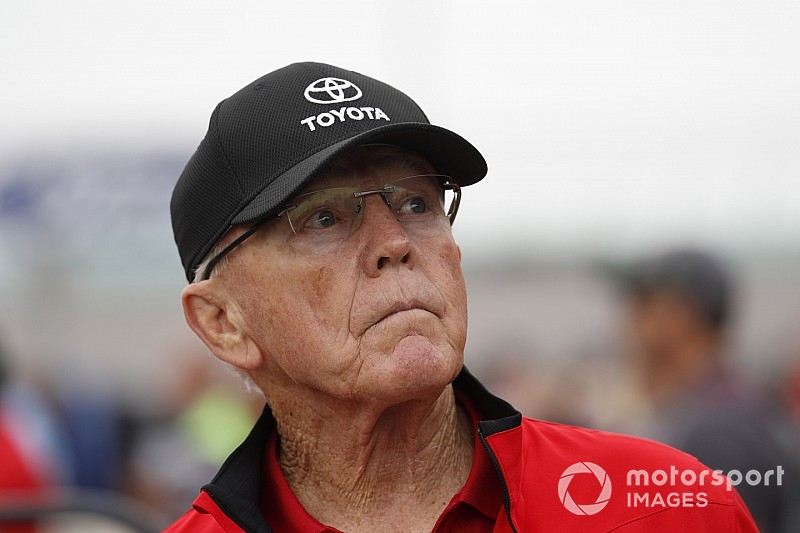 Joe Gibbs Racing may begin the 2019 NASCAR without co-founder J.D. Gibbs but Joe Gibbs insisted Friday that “J.D. lives on in us.”

J.D. Gibbs, the eldest son of Joe Gibbs, died Jan. 11 due to complications following a long battle with a degenerative neurological disease.

A memorial service, attended by more than 3,000 people and live-streamed on NASCAR.com, was held on Jan. 25 at Davidson (N.C.) College.

In previous interviews since his death, JGR driver Denny Hamlin said he planned to dedicate this season to J.D. and would like to win the Daytona 500 in his honor.

“I’ve got to tell you, it’s been a time for our family and to see everybody in this sport and everybody that has stepped up to help us, everybody, Toyota, our friends, Bob (Leavine), everybody, there’s been so many people that walk up to me and say, J.D. did the following,” Joe Gibbs said Friday at Daytona International Speedway.

“There’s so many small stories. J.D., I honestly believe, not just because he’s my son, I think J.D. was living a godly life and was touching so many people, and it’s come back over and over again.”

Joe Gibbs said his organization is using this weekend’s season opener to direct attention to the JDGibbsLegacy.com Web site, which houses a video of the memorial service and information about the J.D. Gibbs Legacy Fund.

“J.D.’s life, J.D. lives on. He lives on in us, those four boys, his family, and all those that he’s touched. God in his Word said that those that have gone on before are in Heaven cheering us on,” Gibbs said.

“I don’t want to let J.D. down, and I just really appreciate how many people here prayed. This is a close-knit family in a lot of ways, and so many people have stepped up to help us.

“I can’t thank you enough. J.D. had a vision of helping inner-city kids with young life. The funds that have been flowing into that have been unbelievable. So, J.D. is going to live on in all those ways.

“I just thank everybody here that’s been a part of that.”

Ed Laukes, group vice president of marketing for Toyota Motor North America, also announced Friday that during Sunday’s broadcast of the Daytona 500, Fox Sports will do a tribute lap for J.D. Gibbs on Lap 11.

The No. 11 was J.D.’s favorite number from playing football and is currently Hamlin’s car number in the Monster Energy NASCAR Cup Series.

Menard leads second Friday practice ahead of the Daytona 500

Joey Logano "rode the wave" but he's now a "past champion"

F1 newcomer Haas invites Penske and Hendrick to join him