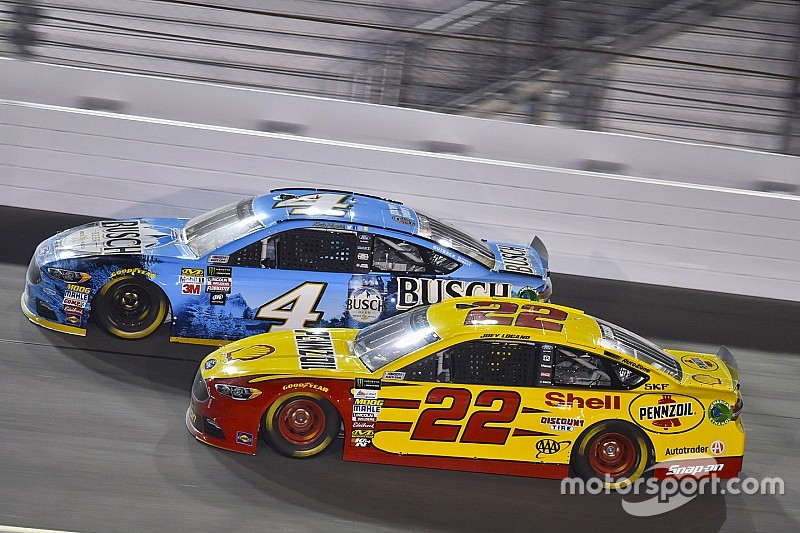 Think of them as NASCAR’s Odd Couple.

Restrictor plate racing can make the strangest of bedfellows — and Joey Logano and Kevin Harvick are no exception--even if, in the past, they have gotten on each others' nerves as often as the fictitious Felix and Oscar did.

On Sunday, the newly-minted Ford Performance teammates worked together in the Advanced Auto Parts Clash, with Logano eventually ending up in Victory Lane.

“Kevin and I, actually we are friends now,” Logano said. “We get along good actually. Believe it or not, I know that's probably surprising to everyone in here, but there have been multiple times throughout speedway racing that we've ended up working together.”

My how things have changed since 2010 when the only thing these drivers could agree on was that they disagreed--vehemently.

The tide changed last year prior to the spring race at Talladega Superspeedway. Logano called on Harvick to form an alliance in an effort to thwart Joe Gibbs Racing’s dominance following the 2016 Daytona 500.

Working with Harvick in The Clash

Three days later, Ford Performance announced the addition of Stewart-Haas Racing to its roster. While the deal was already in the works before the Daytona 2016, as Logano said following his win on Sunday, there is definitely power in numbers.

“Kevin's car was good, and he had four tires on and was able to handle really well and be able to make the moves, push me when I needed to, for the three of us to work together,” Logano said of Harvick and his Penske teammate Brad Keselowski. “One car alone was not going to win this race, didn't have a shot, just because the Gibbs cars and the Toyotas were just way too committed to each other. It was going to take a lot more than one guy to beat them.

“The only way we were going to beat them was to do the same and be better at it than they were. So Brad, myself and Kevin, we were able to kind of talk a little bit over the caution through our spotters and said, ‘Hey, we're going to be committed to each other and we're just going to figure it out as we go.’”

The Team Penske duo of Logano and Keselowski has become NASCAR’s most formidable threat on restrictor-plate tracks. Penske has a three-win streak at Talladega Superspeedway and has won two of the last four races at Daytona.

Harvick, who won the 2007 Daytona 500 and the 2010 July race from the pole, also excels on superspeedways. But clearly, the 2014 Monster Energy NASCAR Cup champion has experienced his own issues with "Silver Spoon" racers in the past. He did not mince words when calling out Austin and Ty Dillon, the grandsons of his former team owner Richard Childress.

And as long as Harvick and Logano have been rivals, viewing the pair as allies might take some getting used to.

The roots to this rivalry date back to Bristol Motor Speedway in March nearly seven years ago when Harvick dumped Logano in an Xfinity Series race. When Harvick attempted to teach the young driver “respect” three months later in the Cup race at Pocono, by dumping him on the last lap, Logano decided it was time to stand up for himself. Although he never got face-to-face with Harvick, the incident elicited the infamous “His wife wears the firesuit in the family, tells him what to do, so it's not his fault,” comment.

As recently as two years ago, the drivers were playing bumper cars on the cool-down lap following the 2015 Sprint Unlimited at Daytona International Speedway. Harvick expressed his displeasure with Logano, who had attempted to draft with the No.4 car in the closing laps of the event. As the drivers entered Turn 3 with two laps remaining, Harvick’s car got loose and careened into the wall.

Leery of a confrontation on pit road, Logano’s team restrained its driver before the incident escalated.

“Obviously we've had our differences because we both are hard racers,” Logano said. “That's what it's going to be. We both want to win really bad, and we both do what we've got to do to win. Obviously we're not going to see eye to eye on some things in the past. But that's in the past, and I respect him as a race car driver. I believe he respects me as a race car driver. We have the same goals, and we really kind of go through things the same way.

“With all that being said, we're able to work really well together at the same time because we're both going to be aggressive to get to the front, and we both understand we've got to do what we've got to do to win. I think that's a good driver to work with on a speedway, and we've ‑‑ it's not the first time we've worked together. That's what I'm saying is obviously that alliance has become stronger with us having the same manufacturer now, but you know, it wasn't a surprise to me at all. It was kind of the plan from the get‑go.”

While Logano’s crew Todd Gordon doesn’t consider the relationship with SHR to be “as tightly knit” as the JGR/Furniture Row Racing alliance, he believes Stewart-Haas and Team Penske can benefit one another.

“We're two independent teams, but I think we ‑‑ obviously they've got good cars,” Gordon said of SHR. “They've got good people. And I can speak particularly for the 22, it seems like us and the 4 end up together a lot of these speedway races for a fair amount of it. I think Joey and Kevin drive very similarly. We've been around the 41 (Kurt Busch) a fair amount.

“We'll work with the guys that we can, and those of us that have a common thread I think understand it's a good tune for everybody.”

Chase Elliott on this year's 500: "I sure would like to not wreck"