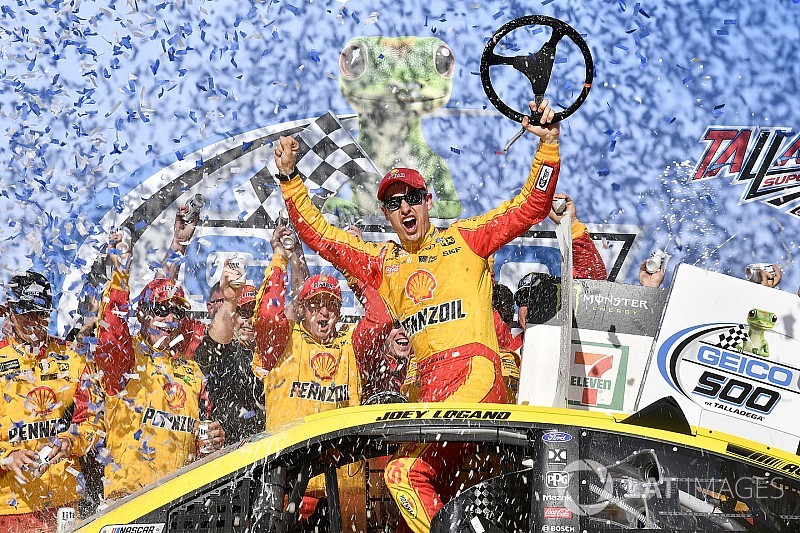 Logano held off a furious charge from fellow Ford driver Kurt Busch and a fast-approaching Chase Elliott to win Sunday’s GEICO 500 at Talladega (Ala.) Superspeedway.

Logano’s most recent win came last spring at Richmond (Va.) Raceway. It’s the 19th win of his career and all-but locks him in the 2018 NASCAR playoffs.

“Yeahh, baby, we’re back! This feels so good!” Logano said over  his team radio has he crossed the finish line.

It's Team Penske's seventh victory at Talladega in the past 13 races.

Following pit stops during the break between Stages 2 and 3, William Byron elected remained on the track and took over the lead when the final stage went green on Lap 116. He was followed by Paul Menard and Harvick.

Kyle Busch was penalized for speeding on pit road during the stops and restarted the race from the rear of the field.

On Lap 125, Kurt Busch got some help on the high side and was able to by Byron to take the lead for the first time in the race.

Caution came out on Lap 129 for debris on the front straightaway, which bunched the field. Bowyer returned to the lead lap as the first car one lap down.

Stenhouse was the first car off pit road and took over the lead on the restart on Lap 134, followed by Hamlin and Kasey Kahne. Elliott was penalized for an outside tire violation during his pit stop and had to restart from the rear of the field.

With 52 laps to go, Hamlin got a run and returned to the top spot followed by Kahne and Ryan Blaney.

On Lap 139, Logano, with help from Keselowski, retook the lead as Hamlin dropped to third.

Two laps later, Keselowski moved to the top spot as Team Penske ran 1-2-3. Logano moved back out front on Lap 142.

On Lap 145, several teams began their final round of green-flag pit stops in the race, with most opting for fuel-only.

Both Hamlin and Stenhouse were penalized for being too fast on pit road and were required to make a pass-thru penalty. Hamlin got caught for speeding again while serving his penalty and was forced to make a stop-and-go penalty.

On Lap 147, Logano cycled back into the lead followed by Keselowski and Almirola.

On Lap 154, a caution was displayed when Timmy Hill appeared to have lost an engine in his No. 51 Ford. Despite reports of a vibration, Logano elected to remain on the track and retained the lead on the restart with 29 laps remaining.

Truex, among those who elected to pit under the caution, was penalized for speeding on pit road and had to restart from the rear of the field.

The race returned to green with 17 laps remaining.

With 10 laps left, Logano continued to lead the way and holding a small advantage over Harvick and Kurt Busch.

"What a fast Ford," Logano said in Victory Lane. "Teamwork is what did it today. And not just the Team Penske Fords but all of the Fords out there - Kevin (Harvick), Kurt (Busch). We worked really well together. We got a blue oval back in Victory Lane, so proud of that.

"It's been a long time coming. We've been getting consistent. We've been scoring points and we knew a win was just around the corner. I don't have to worry about the whole playoff thing anymore."