Joey Logano returned to his roots and emerged a NASCAR champion

Joey Logano’s path to his first Monster Energy NASCAR Cup Series championship was not an easy one and it required a slight detour to his past. 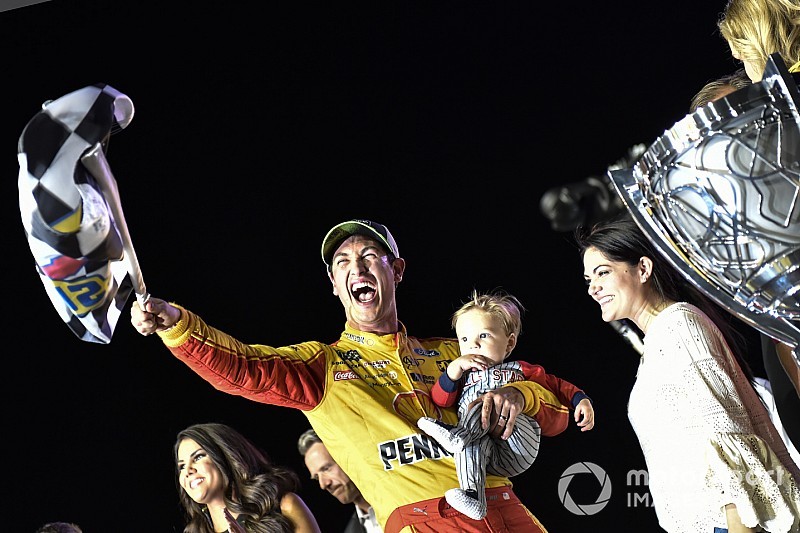 Even before Logano made his Cup series debut at age 18, he was already a familiar name in NASCAR circles.

Logano entered NASCAR with high praise from veterans such as Mark Martin and a clever nickname to go with it: “Sliced Bread” (as in the greatest thing since).

Although he quickly won races in what was then called the Nationwide Series and even picked up a fuel-mileage victory in his rookie Cup season, consistent success in the Cup series was absent, which left him on the outside looking in at Joe Gibbs Racing at the end of the 2012 season.

The expected comments were quick to come from his detractors – he was “overrated” or not deserving of a fulltime Cup ride at such a young age because he “didn’t pay his dues.”

In reality, he was rushed into a hornet’s nest with no repellant.

“You come in with so much hype, and you’re expected to win right off the bat. You know if it wasn’t for that hype, I wouldn’t have had the job anyways, so I don’t think it’s a bad thing in any way,” Logano said.

“But I expected to go out there and win, as well, and just got my butt handed to me on a platter. It was hard. There’s a lot of times that I felt really weak, and I’d break down, and it was just ... it was hard.

“You know when you’re confused, you don’t know how to be better.”

Veteran team owner Roger Penske, with the advice of his Cup driver Brad Keselowski, believed Logano’s true talent remained untapped and were confident they could help bring it out.

In his first two seasons at Team Penske, Logano went from a driver in danger of losing his ride to a five-win season and his first appearance in the Championship 4, with his first opportunity to win a series title.

“At the time that I was losing my job at Gibbs, that was a pretty low point for me, and I don’t think I think as clearly as I do now about all the lessons I learned,” he said.

“I was thinking about, ‘I’m not going to be a race car driver anymore and what am I going to do with my life, and this is awful.’ The next thing you know, there’s the No. 22 car and Roger Penske and (crew chief) Todd Gordon and an amazing race team all the way through that wants you to drive.”

Logano added a six-win season in 2015 but failed to advance to the final four after a run-in with Matt Kenseth at Martinsville, Va., in the semifinal round of the playoffs. He returned to the Championship 4 in 2016 and finished as series runner-up.

Last year, however, turned out to be a “horror film” of a season, as Logano described it. Despite an early season win at Richmond, Logano’s team was penalized and lost the ability to use the win to make the playoffs.

He would not win again and missed the playoffs entirely for the first time since 2013. It was something Logano and Gordon were determined not to repeat.

In refocusing on the 2018 season, Logano – perhaps unexpectedly – also recaptured something from his youth. He went from a fearful driver at times to a fearless one, willing to do whatever it takes to win.

“Honestly, I guess I just felt like I’m back to where I was growing up. As the kid growing up, I was an aggressive racer, and I was able to win a lot of races,” Logano said.

“I got humbled pretty quick (in NASCAR). I guess humbled is the word. I got beat up. I got pushed around a lot. I wasn’t fast. I didn’t have no respect. I think that beats up on your confidence pretty quickly.

“You have to kind of dig back inside. Every sport is a mental sport, so you have to really figure out how to be strong again and dig out of holes.”

Sunday at Homestead-Miami Speedway, Logano finally climbed the last step out of a deep hole to emerge as the champion so many always believed he would be.

And in the process, he may have also rediscovered he is the driver he always thought he was.

Chevrolet sees "more work to do" before 2019 NASCAR season

Joey Logano ready to "jump into anything and go fast"