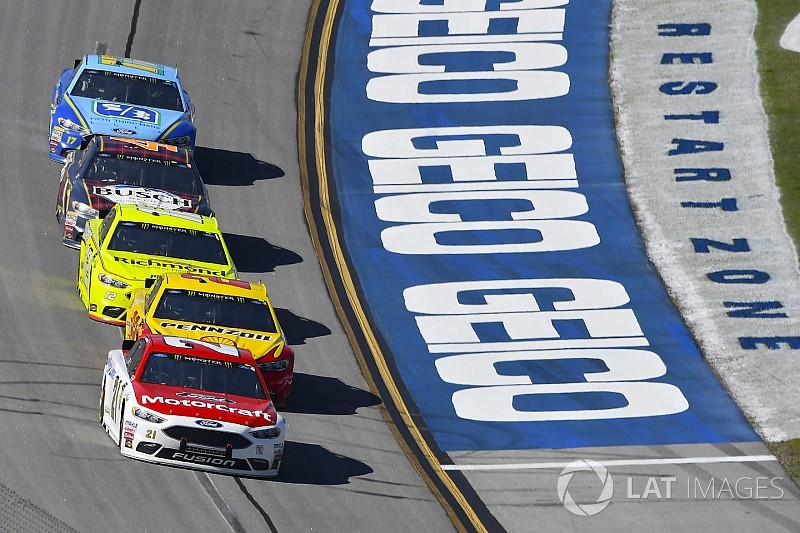 Joey Logano didn’t have any teammates with him at the end of Sunday’s race at Talladega but he did have help.

A multi-car wreck on Lap 165 of 188 had eliminated Logano’s Team Penske teammates Brad Keselowski and Ryan Blaney from contention in the GEICO 500.

Logano was still in the lead when the race returned to green with 17 laps remaining, but it appeared he may be in trouble with Stewart-Haas Racing teammates Kurt Busch and Kevin Harvick as well as Hendrick Motorsports driver Chase Elliott bearing down on him.

But times have changed, and in the manufacturer-first strategy that has come to dominate restrictor-plate racing of late, the fact Busch and Harvick were also in Fords gave Logano and his No. 22 team some consolation.

“When you look at these speedway races, you got to be in a position. You can't do anything on your own,” explained Logano’s crew chief, Todd Gordon. “You try to find those guys that have common interests.

So, while it may be every Ford for itself when the race approaches the finish, if Fords can band together to prevent Toyotas or Chevrolets from spoiling the party in the meantime, they seem willing to try.

The ‘One Ford’ approach is not new – it came into fruition last season as Ford swept all four superspeedway races in the Monster Energy NASCAR Cup Series. It was on display again Sunday as many of the Ford teams elected to pit together during green-flag pit stops.

While the approach may not be new, some of the participants have changed. Picking the right drafting partners even transcend personal relationships at times.

Harvick and Logano have not always gotten along, but they tend to race well together on the track and are still willing to do so for mutual benefit.

“I look at him as almost a teammate at this point,” Logano said of Harvick. “We race really well together, not only at speedways, but we do seem to find each other a lot here. Mile‑and‑a‑half's, short tracks, we work well together.

“We race hard, don’t get me wrong. But there’s times during the race we see the big picture. Surprising? Probably after the beginning parts of my career. It shows that you’re able to move past things. You don’t hold grudges forever.

“Now that he drives a Ford, it makes it even easier for us to have that relationship. So, yeah, it's good to have an ally like Kevin out there. You don't want to have him on your bad side is what I figured out, too.”

Team Penske Roger Penske said Sunday’s victory was simply a matter of “executing.” In fact, during the race, several times Joey Meier, Keselowski’s spotter, reminded his driver to “stick to the plan.”

“I think today we put ourselves in position,” Penske said, “and guess what? We won.”