Joey Logano saved his best move for the last lap. 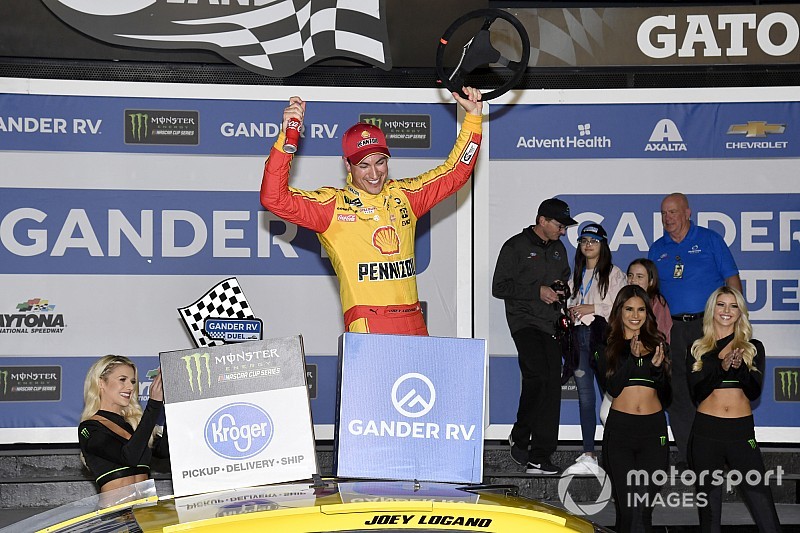 Running fourth at the time, Logano dove to the inside of leader Clint Bowyer with a little help from Ryan Blaney on the final of 60 laps and held on to win the second Daytona 500 qualifying race at Daytona International Speedway.

“You have the whole race to think about a move when we’re all up there just waiting, waiting, waiting,” said Logano, the reigning Monster Energy NASCAR Cup Series champion. “There was a lot anxiousness behind with them all really wanting to go but I just said, ‘I got to wait, I got to wait.’

“The later you do it, the less the risk if it doesn’t work. I got a side run from (Blaney) behind me. We went to the bottom, had a good run, was able to side-draft (Almirola) and pull him back and then barely get enough to break that plane in front of (Bowyer).

“After that I just had to run the block to the finish line. It’s cool to see a couple Mustangs in Victory Lane already and hopefully we can continue that in the big race on Sunday.”

Ryan Truex and Joey Gase both failed to make the field for Sunday’s Daytona 500.

Alex Bowman, who started from the pole, led the first 11 laps until he was among the first group of cars to dart down pit road, most taking fuel only.

Bowyer inherited the lead while the other made their pit stops. Erik Jones was penalized for being too fast on pit road and was forced to serve a pass-through penalty.

Brendan Gaughan moved into the lead as several other drivers elected to pit. By Lap 22, Bowyer returned to the lead after everyone had made a pit stop under green.

On Lap 34, Kyle Larson reported he may have an issue with his engine and fell back in the field.

Ross Chastain pit on Lap 37 but was penalized for speeding on pit road and was forced to make a pass-through penalty.

With 20 laps to go, Bowyer remained comfortably out front followed by Hamlin, Almirola, Logano and Blaney.

Bowyer continued out front with five laps remaining in the race, followed by Hamlin and Almirola. Elliott continued his crawl to the front, moving into the sixth position.

Joey Logano ready to "jump into anything and go fast"