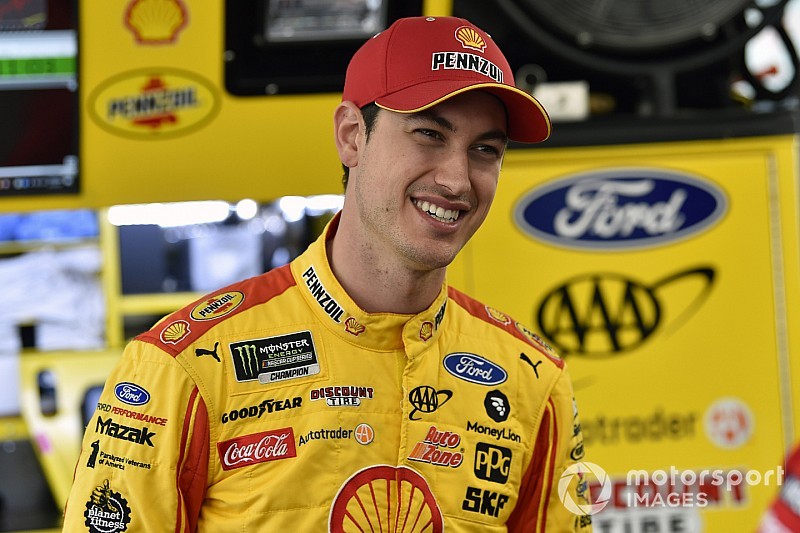 Joey Logano passed Martin Truex Jr. with five of 100 laps remaining and hung on for the Stage 2 win at Richmond.

Truex inherited the lead from Kyle Busch when Busch was busted for speeding on pit road during pit stops on Lap 128 of 400. Truex was never seriously challenged for the lead until Logano caught him with five to go.

Following the break between Stages 1 and 2, Kyle Busch was once again the first off pit road. He was followed by Logano, Truex, Harvick and Bowyer. The race returned to green on Lap 112.

On Lap 116, Kyle Larson was forced to pit under green with a bad tire rub he acquired after contact with Daniel Hemric. When he returned to the track he was running 31st and two laps down.

With 75 laps remaining in the stage, Kyle Busch held a 1.7-second lead over Logano and Jones had made his way into the top-10 for the first time in the race.

On Lap 127, Larson had a tire go down and hit the Turn 1 wall to bring out a caution. Asked over his team radio if he was OK, Larson said, “Yeah. Just having a blast this year. Lot of fun.” Larson took his damaged car to the garage, ending his race.

All of the lead-lap cars elected to pit, with Kyle Busch the first off pit road but he was penalized for speeding on pit road, which sent him to the rear of the field.

On the restart on Lap 136, Truex led the way followed by Logano, Harvick, Bowyer and Kurt Busch.

With 50 laps remaining in the stage, Truex held a small lead over Logano with Harvick running in third. Keselowski remained in fourth.

With 30 laps to go in the stage, Truex maintained a small advantage over Logano with Harvick continuing to run in third.

Kyle Busch had only made his way up to 16th after his speeding penalty with 20 laps left in the stage.

With five laps to go, Logano made his way around Truex to take the lead for the first time.