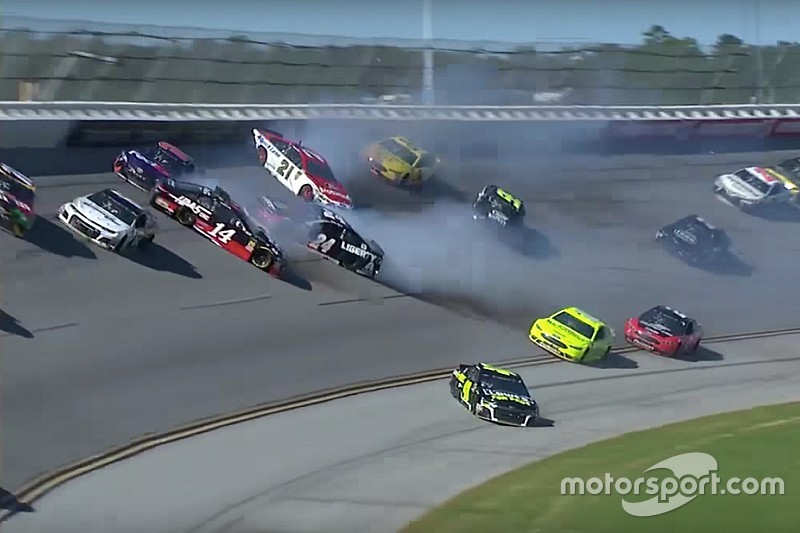 It took 165 laps, but the 'Big One' finally struck at Talladega Superspeedway with just over 20 laps to go.

As the field raced through Turns 3 and 4, Jimmie Johnson got loose as so many cars have during this race, but he was unlucky enough to connect with the right front of teammate William Byron.

What followed was a massive incident that collected 14 cars and ended the hopes of several contenders for the win.

Johnson was able to continue and went on to finish 12th, but many others weren't so lucky. The incident proved to be the end of the day for Byron, Clint Bowyer, Brad Keselowski, Austin Dillon, A.J. Allmendinger, Michael McDowell and Stage 2 winner Paul Menard.

"Honestly, I think we got side-drafted going into three and got me a little bit free and I think I just packed some air on his left rear. I haven't seen the replay, so I can't really tell.

"Just kind of unfortunate that we couldn't get to the end of the race," said Byron, who finished 29th after leading 14 laps."

Johnson gave his take after the race, saying, "It looks like a racing thing there. I mean something got him (Byron) off the bottom.  I was in the second lane and he came up near my lane and then packed air underneath us and around it went.”

He added, “I knew I had help somehow just the way it turned around.  Unfortunately, when I was sliding the No. 12 car (Blaney) hit us and bent something in the rear end. It wasn’t the same after. There really isn’t much damage and he hit me pretty hard on the other wheel and it was just super draggy and slow that last restart.  Something is bent in the rear end and very loose.”

Menard won his first ever stage Sunday, but was unable to see his race to completion, saying, "Really fast Motorcraft Quicklane Ford. We got shuffled back and it's so hard to make up ground. We got the bottom rolling pretty decent and just ran out of real estate I guess."

The race resumed with 17 laps to with Joey Logano ultimately taking the checkered flag over Kurt Busch and Chase Elliott.