Johnson had been battling Matt Kenseth for the lead in the Food City 500 when a right front tire failure dropped him to 39th place.

As painful as it was for most drivers to sit through the 3-hour, 19-minute early-race rain delay, the interruption was excruciating for Jimmie Johnson, who finished 19th. 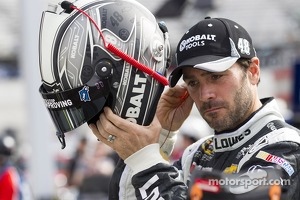 Johnson had been battling Matt Kenseth for the lead in the Food City 500 when a right front tire failure dropped him to 39th place, two laps down.

Johnson took the lead during the competition caution on Lap 52 when his team took left-side tires only to gain track position. During the rain delay, he also took exception to the notion that the strategy had backfired.

"It didn't wear out," said Johnson, who at that point had led a race-high 44 laps. "Something made it come apart. I don't know if we clipped something on the track that kind of scored the tread and then it unraveled as if something else happened with the tire."

But Goodyear spokesman Rick Heinrich said the tire was, indeed, a victim of wear.

"The 48 decided to take a pass on changing right sides and changed left sides only during the competition caution," Heinrich told FOX Sports. "What happens is you wear through the tread rubber (and) beneath the rubber is fabric. That fabric started to come unwound."

Ricky Stenhouse Jr. at Bristol: Every man for himself