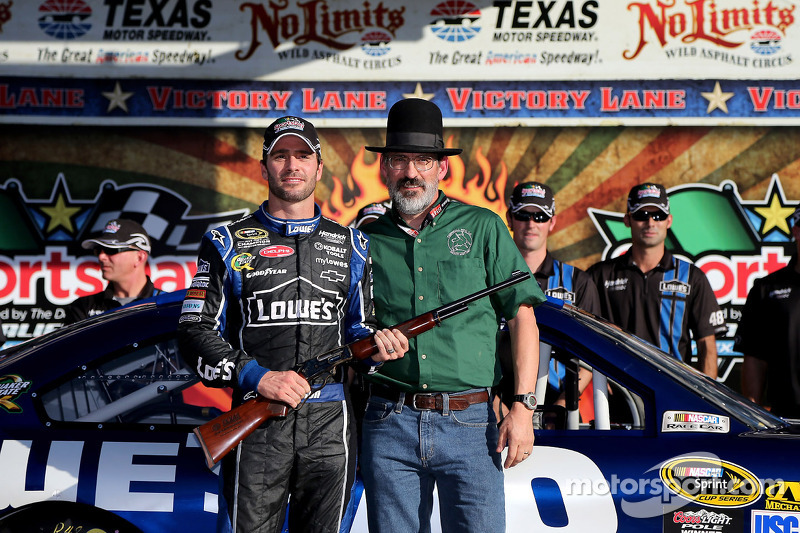 NASCAR Sprint Cup Series points leader Jimmie Johnson made a lap around Texas Motor Speedway in his No. 48 Hendrick Motorsports Chevrolet in 28.261 seconds on Friday to claim the pole for Sunday's AAA Texas 500 at the track. It is his fourth pole of 2012 and the 29th of his Sprint Cup career, putting him in a tie with former driver Ricky Rudd for 23rd all-time.

"I’m in the mindset of sitting on the pole and winning the race," Johnson said. "I think that’s what you have to do with as tight as the points have been and with how strong the competitors have been on the race track."

Johnson will share the front row with the No. 16 Roush Racing Ford of Greg Biffle, the winner at Texas the last time the circuit visited the track earlier this season. Biffle was second-fastest in qualifying with a lap time 28.365 seconds.

"I drove it down in there and committed but couldn’t hold it down from the center out," Biffle said. "The car was sliding and skating and I probably carried too much speed on entry and paid the price on exit. I backed it up a little in three and four and got a better three and four."

Kyle Busch was third in the No. 18 Joe Gibbs Racing Toyota with a fast lap of 28.402 seconds. Toyota also claimed the rest of the top-five spots on the starting grid, with a couple of Michael Waltrip Racing drivers rounding out the top-five. Clint Bowyer was fourth in the No. 15 and Martin Truex Jr. fifth in the No. 56. 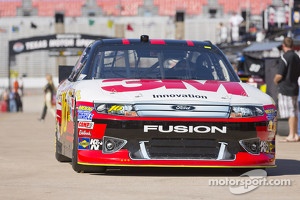 "The 48 put down a heck of a lap going that early," Biffle said prior to the end of the session. "I am sure some guys that are faster here are coming up but we will have to wait and see."

“It feels like the pole," Keselowski who hasn't qualified well as of late, said. "It may not be the pole, but it feels like the pole for us. Our car has had a ton of speed since we’ve been here in race trim. Qualifying trim has been our weakness all year. I think that bodes very well for us on Sunday.”

Kevin Harvick was the slowest Chase for the Sprint Cup Series driver in qualifying, posting a lap time of 28.757 in the No. 29 Richard Childress Chevrolet for the 23rd spot on the starting grid.

Jimmie Johnson focus on the Chase for the NASCAR Sprint Cup