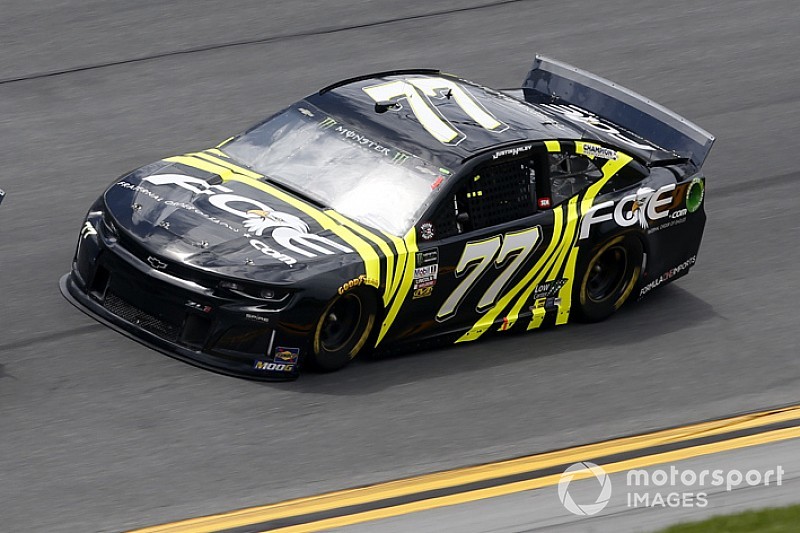 A 17-car wreck on Lap 118 of a scheduled 160, considerably narrowed the list of contenders for the win in Sunday’s rain-delayed Coke Zero Sugar 400, but when the race was finally called for weather after 127 laps it was Xfinity Series driver Justin Haley who earned the win.

After the wreck, Kurt Busch emerged as the leader but elected to pit under caution. Just as he and others headed down pit road, lightning strikes within an 8-mile radius of the track placed the race under a red-flag.

Busch pitting had moved Haley’s No. 77 Chevrolet – typically a back-marker in most races – into the top spot.

Since the race never restarted and two stages had been completed to make the event official, Haley was declared the winner.

“It’s absolutely a blessing. It’s pretty incredible that I have so many great people around me that have given me this opportunity to come to this level and the stage that we’re performing on,” Haley said after the race was declared official.

“Obviously Todd (Braun) and my family have done a great job but the Fraternal Order of Eagles, everyone at FOE, who has given me this opportunity with Spire Motorsports, it’s truly a blessing.

“I never even saw myself running a Cup race until I got a call a few months ago to do Talladega, and it’s just unreal. I don’t know how to feel.”

Haley said he never imagined getting the opportunity to compete in the Cup series, let alone pick up a victory in it.

“The stars aligned, and I didn't ever think I was going to get redemption back from a few years back in Daytona, last year at Daytona when I got the Xfinity win taken away from me,” he said.

“To come back and get redemption in the Cup Series is pretty cool, and it makes that second‑place finish with Kaulig Friday night a lot better.”

Since Haley competes fulltime in the Xfinity Series he will not be eligible to compete in the Cup series playoffs with the victory. It will be difficult For Spire Motorsports to qualify for the owners’ championship since it is far outside the Top 30 in points.

In the offseason, Spire Motorsports bought the charter of Furniture Row Racing’s No. 77 team after it decided to shut down. It runs its Cup program out of Premium Motorsports.

Haley, 20, is a fulltime competitor in the Xfinity Series with Kaulig Racing. He won four races in the Truck Series last season and finished third in the series standings.

One year ago, he lost the July Xfinity race at Daytona when he was penalized for passing for the lead after going below the double yellow line, handing the win to Kyle Larson.

Beginning next year, Daytona's second Cup race will serve as the regular season finale while Indianapolis Motor Speedway will take over the July 4 weekend date.

Following the break between Stages 2 and 3, all of the lead-lap cars elected to pit and Joey Logano was the first off pit road thanks to a two-tire pit stop.

On the restart on Lap 106, Joey Logano was followed by Newman, Erik Jones, Austin Dillon and Chase Elliott.

Newman briefly took the lead on the restart only to see Austin Dillon reclaim it with a shove from Logano before the completion of the first green lap.

With 50 laps to go, Logano moved head on the outside line to reclaim the lead.

A three-wide move off Lap 112 put Paul Menard into the lead and when the cars entered Turn 1 on Lap 113, Denny Hamlin powered into the top spot.

With 45 laps remaining, Hamlin maintain a small advantage over Austin Dillon with Jones running close behind in third.

On Lap 118, Austin Dillon appeared to try to blocking an advance from Bowyer entering Turn 1 which erupted into an incident that collected at least 17 cars.

“He just kept coming down to try to block,” said Bowyer of Austin Dillon. “What can you do? That was pretty foolish, a mess that (Dillon) created.”

Kurt Busch emerged as the leader following the massive wreck but elected to pit. Just before the race was going to restart, it was red-flagged with lightning strikes took place within 8 miles of the track.

At the time of the red flag, Haley, was in the lead, followed by Byron, Johnson, Ty Dillon and Newman.

The red flag was close to being lifted after about an hour delay but lightning was reported again within an 8-mile radius, which forced another 30-minute delay.

NASCAR finally called the race just after 5:30 p.m. ET when a severe thunderstorm drenched the track with heavy rain.

Kurt Busch derailed by 'one random lightning bolt' at Daytona