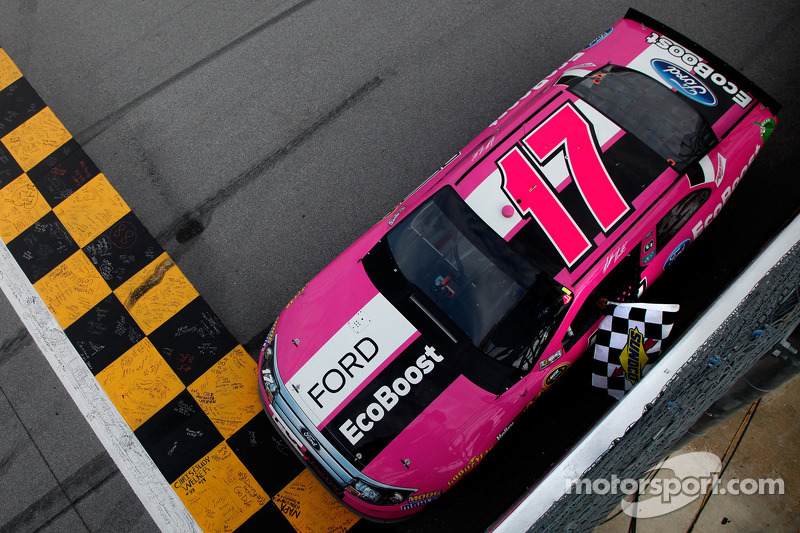 Fresh off his electrifying last-lap triumph at Talladega Superspeedway on Sunday, Matt Kenseth will join the rest of the Blue Oval Boys at Charlotte Motor Speedway for the running of Saturday night’s Bank of America 500, race No. 5 of 10 in the Chase for the Sprint Cup. 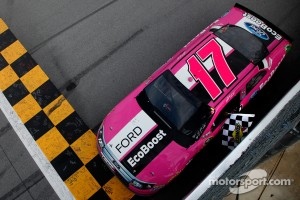 Kenseth and Roush Fenway Racing teammates Greg Biffle and Carl Edwards have reason to be optimistic about competing at what the NASCAR Sprint Cup teams consider their home track, which is only about 5 miles from Roush Fenway’s race shop in Concord, N.C.

From the early days, the 1.5-mile Charlotte track has been a good one for Ford.

Speedy Thompson drove a Wood Brothers Racing Ford to victory in the 1960 National 400, the second race ever run at the venerable track. In 1963-4 Fred Lorenzen won three straight at CMS in his Ford, and David Pearson, perhaps the greatest Ford driver ever, had an astounding 14 poles and three victories here.

The track qualifying record? That was set in October 2005, when Elliott Sadler wheeled a Robert Yates Racing Ford to a lap of 193.216 miles per hour.

Ford teams and drivers continue to enjoy success here to this very day.

Kenseth comes into Charlotte as the defending winner of the Bank of America 500 and he also won his first Sprint Cup here, capturing the Coca-Cola 600 in May 2000.

In 26 starts at Charlotte Motor Speedway, Kenseth has two wins, seven top fives and 14 top 10s, with an average finish of 14.2. His driving rating at the track, according to NASCAR Loop Data statistics, is 95.1, fourth best in the field.

Biffle’s numbers are solid as well. He has made 19 starts at CMS and has posted four top-five and seven top-10 finishes, with an average finish of 17.1. His NASCAR driver rating is 92.3, fifth-best at the track.

Saturday night’s race marks the halfway point in the Chase, and while Biffle and Kenseth both got off to a slow start, Sunday’s wild melee at Talladega helped out a lot. Biffle’s sixth-place finish on the Alabama track moved him up two positions to ninth in points. More importantly, he’s just 9 points out of fifth place, which a very doable target.

While Kenseth is still 12th in points, as he was coming into Talladega, his deficit to fifth place has shrunk from 40 points out of fifth before Talladega to 22 back now.

With a flurry of strong finishes, Biffle and Kenseth both have a realistic shot at cracking the top five before the year is out. Still on the Chase calendar in addition to Charlotte are 1.5-mile tracks in Kansas, Texas and South Florida. Ford Championship Week at Homestead-Miami Speedway will conclude the 2012 NASCAR season on Nov. 16-18.

The 1.5-mile tracks have always been Roush Fenway’s strong suit and the final six races on the Sprint Cup schedule should be a definite shot in the arm for the team. So look for some big performances starting Saturday night under the lights at Charlotte.

Johnson feels he will be a threat at Charlotte 500

Bowyer says Charlotte is huge in the pursuit of a championship