Kenseth parked after wrecking Logano out of the race lead - video 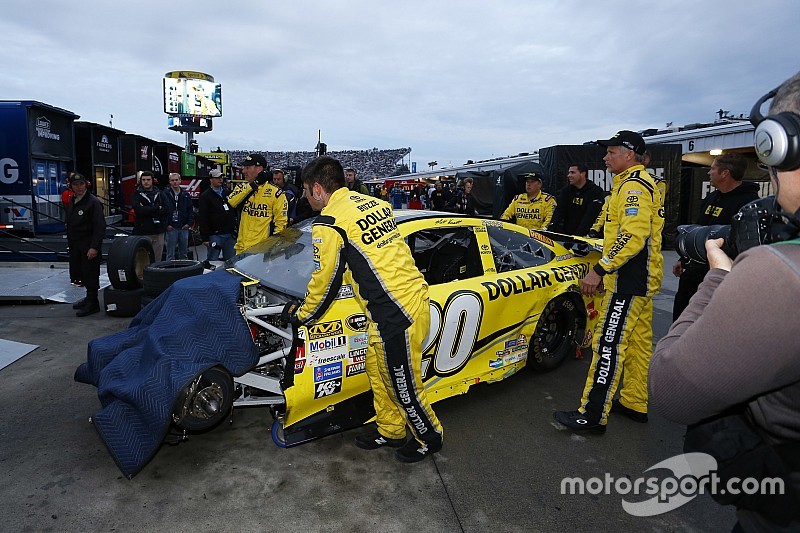 While Joey Logano was leading the Goody’s 500, Kenseth pile drove the damaged No. 20 Toyota into the left rear of the No. 22 Ford as it entered Turn 1 on Lap 453.

“I’m ok, I blew the right front or something,” Kenseth said over the radio.

"Definitely my fault," he later added. "I got into him. The right front was dragging down there and probably should’ve went to the garage area and went into the corner there and man couldn’t get it to turn and collected him."

Logano had led 207 laps until the wreck. “I got wrecked, I don’t know what more to say about it,” Logano said. “Really a coward move by someone who is that mature and knows what racing is all about.

"I don’t have any comments for that," Kenseth said when asked to react to Logano's comments.

NASCAR red-flagged the race on Lap 454, which lasted for 12 minutes and 46 seconds.

Kenseth was involved in an earlier wreck triggered by Kurt Busch on the Lap 434 restart. He returned to the track on Lap 447.

Two drivers with a history

Logano had two previous run in with Kenseth. While Kenseth led the race at Kansas, Logano dumped him with five laps remaining in the race.

Then last weekend at Talladega, Logano cut off the No. 20 as he entered pit road — which fired up the former champion again.

"I had two chances to win I think in the last three weeks and I got wrecked out of both of them going for the lead. One from him (Joey Logano) and one from Brad (Keselowski) so that’s disappointing. We should have never been in that spot trying to limp that car around and get the finish.”

Both drivers, crew chiefs and team owners of the Nos. 20 and 22 were called to the NASCAR hauler.

"I’ve been on the receiving side of that, too," Kevin Harvick said of Matt Kenseth. "I got into Matt and it was actually here. He throttled right up and it wasn’t 50 laps later that I was in the fence," said driver Kevin Harvick. "That’s kind of an eye-for-eye situation with Matt. If it’s fair it’s fair and if it’s not, it’s not. There is really no in-between with Matt. Racing around him for a long time, you kind of you know where you sit with him and so be it.”