The track is taking rubber perfect.

Roush Fenway Racing’s Biffle earned the first NCWTS title in track history on June 17, 2000 before scoring three second-place and a total of five top-10 NNS finishes at the track in six starts from 2001 to 2007.

He was pleased with his No. 16 3M Ford’s setup off the hauler and the performance of the Goodyear tire compound.

“We brought notes from Chicago, Kansas and basic mile-and-a-half racetracks, then, from what we did here before. We looked at all of that and picked out of a basket as to where to start. We hit it on the nailhead right out of the garage. We haven’t made a lot of changes and we’re running the same speed as all the guys.

“The track is taking rubber perfect. It’s turning color and you can see the groove coming in. When we’re through, you’ll be able to stand in the grandstands and see the distinct black line around the racetrack where the cars are running,” Biffle said.

His early laps around the 1.5-mile Kentucky Speedway tri-oval rekindled memories of the track’s unique characteristics and his dramatic .036-of-second, sliding second-place finish to Todd Bodine in the closest NNS event in track history on June 16, 2002.

“I don’t remember a lot about it other than we were wrecking and he beat me by a fender. You’re going to see that kind of race (here July 9). This racetrack will provoke that kind of racing.

“This track is challenging because it’s known for a little bit of bumps. Truthfully, it wouldn’t be any fun if tracks were exactly the same.

“A racetrack has to have character and this racetrack has character. The progressive banking off of Turn 4 makes it a lot of fun to race here. It’s going to be an exciting (Sprint Cup Series) race, it’s going to be really fun,” said Biffle, who enters the week 11th in the NSCS championship standings after taking a season-best fourth-place finish at Texas Motor Speedway along with a total of four top-10 finishes this season.

“Goodyear brought one tire here, basically reassuring themselves that this is the tire they want. They’ve never had tire issues here before with the Nationwide Series, so I don’t see this one being a problem. The tire isn’t putting too much rubber down and I feel like it has decent grip.

“I think it’s a good idea to come here to be sure of the tire because we want to have a really good race for the fans, especially for the first (Sprint Cup Series) race, because it’s going to be a big one. It’s going to be packed out there, so we want to be sure we’re putting on the best show possible,” Logano said. 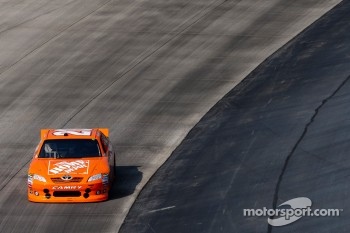 He confirmed he intends to defend his consecutive NNS track titles in the July 8 “Feed The Children 300” and indicated today’s test laps should combine with his recent competitive experience on the track to provide him a slight advantage at the outset of the weekend.

“I have an advantage coming in because I’ve run Nationwide races here lately. I know what the place is like. At the same time, you can’t compare a Cup car to a Nationwide car at all. A lot of stuff is not going to transfer over.

“The racetrack is fun and different. You can run the bottom and go over the bumps or you can run the top and have a smoother racetrack with a longer distance. You might see guys set up their car just to run the high line in Turns 1 and 2 and maybe some guys that do both. I’m going to try to make my car do both. There’s a balance in there somewhere that you can get your car to go over the bottom and still try to put some grip in your car.

“These double file restarts, you don’t get to pick where you’re going. If you’re on the bottom, you’re going to the bottom and that’s a good thing. That’s why you have to be able to have both. You don’t want to be the guy that picks up the field and backs up other racecars. You want to be the guy that passes on restarts and you want to make it happen as quick as possible,” Logano said.

The driver who’s just eight days removed from his 21st birthday is 23rd in the NSCS standings after picking up his first top-five and second top-10 finish of the campaign with a third-place showing in Charlotte Motor Speedway’s Coca-Cola 600.

He will take the green flag for the June 5 series event at Kansas Speedway hoping to improve on his average 21st-place finish through 12 events this season and start a consistent run he’ll need to qualify for the Chase for the NASCAR Sprint Cup.

“We put ourselves in a big enough hole that we need to start doing something. We had a good run last weekend that helped us a lot, but I feel like if we’re as consistent as we were at the end of last year with the top 10 finishes that we had (in five of the closing six races), we can get in.

“Obviously, you’re going to want to go for a win. Two wins, I think, definitely is going to get you in. If you get one and you’re up there in points, you have a really good shot at it, too,” he said.

The “Quaker State 400” anchors a Kentucky Speedway tripleheader weekend that opens July 7 with the NCWTS “UNOH 225.”