What an honor for the Michigan native to be able to drive his Penske Racing Ford across the “Mighty Mac” suspension bridge that connects the Upper and Lower Peninsula of the Great Lakes State.

The 2012 NASCAR Sprint Cup Series champion hails from Michigan, and not only is Keselowski the first resident of the Great Lakes State to take the championship but he now is the first race car driver to have the “Big Mac” all to himself as he drove his No. 2 Miller Lite Ford from one end of the 2,626 mile bridge to the other where he was greeted by the media and fans.

Of course the bridge had to remain open but with respect to the normal traffic, spacing was provided between the race car and other traffic. The only other occasion that the bridge has been partially closed to traffic is on Labor Day each year; however only two of the lanes are closed to allow walkers, including state and national dignitaries, to participate in the annual Mackinac Bridge Walk.

Indeed for Keselowski, it was an honor to drive his “Blue Deuce” across the bridge on May 29th.

Like many who cross the bridge, Keselowski had to pay his $4.00 toll – both ways – plus deal with the winds. Yet he commented that the winds did not bother him as much as he “wanted to keep looking over the side because it was so beautiful.” 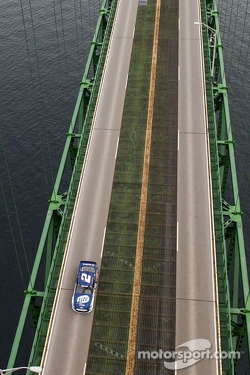 For anyone who has driven across the “Mighty Mac”, they would agree with the NASCAR champion as the view is amazing on both sides!

Keselowski was very pleased to be back home for a short time. "I think it's obviously a great place to be and I'm enjoying every second of it."

The bridge was illuminated blue at night to recognize Pure Michigan icons which has been an advertising program to draw visitors to the state that is surrounded by four of the Great Lakes. It was also lit up in honor of Keselowski and Michigan’s other resident Roger Penske, who just happens to be the championship owner of the No. 2 car. The lights also are to promote racing at Michigan International Speedway.

The lights will remain blue leading into the Quicken Loans 400 on June 16. A race that Penske and Keselowski hope to win.

For those who are unaware, the bridge was initially thought of back in the 1880s, and it took decades before it was operational. The Mackinaw Bridge was designed by engineer David B. Steinman and completed in 1957.

While Keselowski is racing at Dover, Delaware this weekend, his boss is busy in the Detroit area overseeing the IndyCar event on Belle Isle in Detroit. Penske was a driving force to revive the motor sports event in Detroit.

Side note: All the funds were privately donated and no monies came out of the state funds nor the taxpayers of the great state of Michigan. 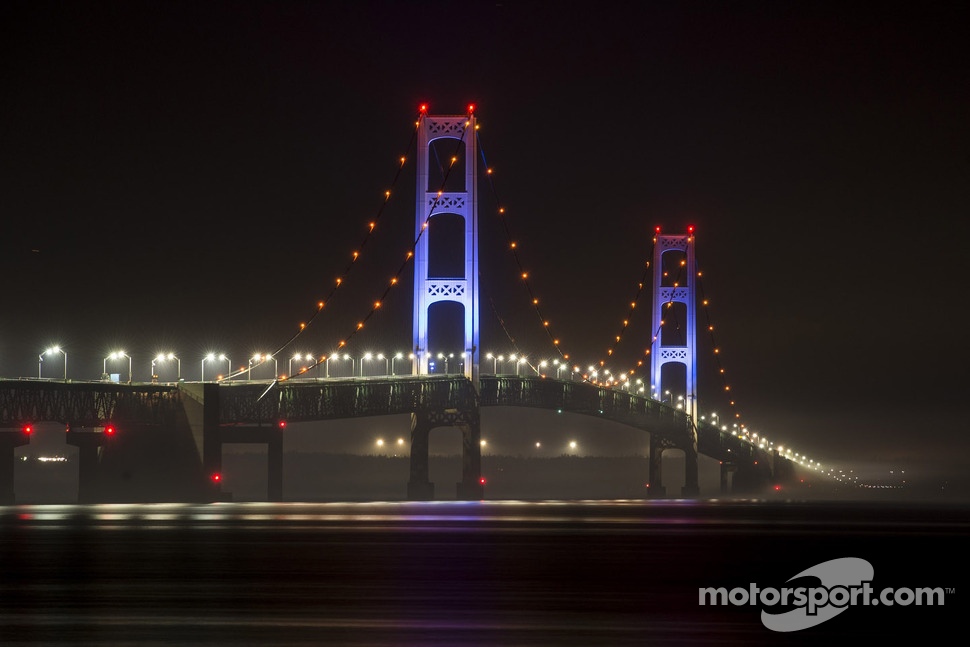