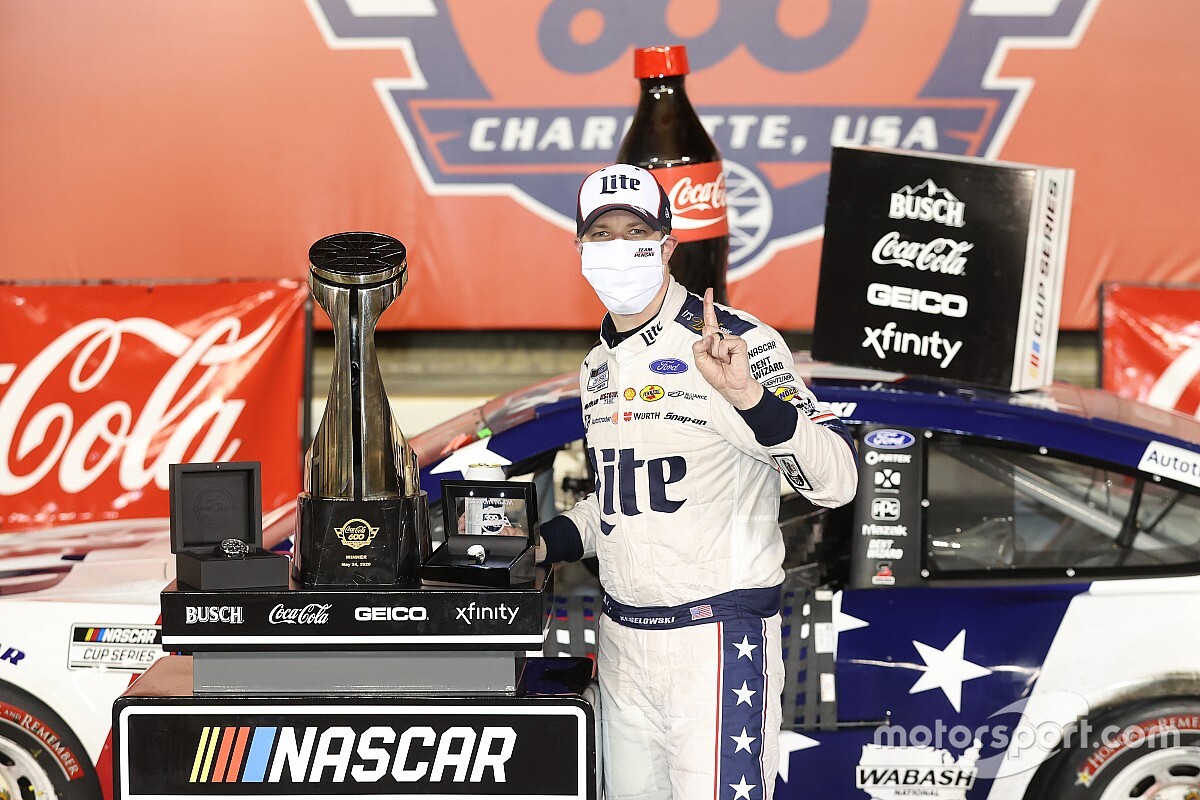 Brad Keselowski emerged from a wild late-race caution as the leader and out-dueled Jimmie Johnson to win his first Coca-Cola 600.

Chase Elliott was in position to pick up his first win of the season but a caution with two of 400 laps remaining sent the race into overtime produced a variety of different pit strategies.

Keselowski, Johnson and six others stayed out, while Elliott was among those who pit for four new tires.

In the final two laps, Keselowski was able to fend off a stiff challenge from Johnson to earn the victory at Charlotte Motor Speedway while Elliott charged from 11th to third.

The win is the first this season for Keselowski and 30th of his career. He has one previous win at Charlotte, taking the victory in the 2013 fall race.

"I know the race ran really late, but Memorial Day is about a lot more than racing, but we’re glad to be able to do cool things like racing  because of the freedom provided by those willing to make the sacrifices," Keselowski said. "I feel like I’ve thrown this race away a handful of times and I felt we were gonna lose it today. I know we’ve lost it the way Chase lost it and that really stinks, and today we finally won it that way and I’m so happy for my team.

"I wish my wife was here. I wish my daughters were here. It’s a major. It’s the Coke 600 and this leaves only one major left for me, the Daytona 500, so we’re checking them off. I’m happy for Ford and everybody who just works their butt off at Team Penske. We might not have been the fastest car today, but, wow, did we grind this one out. The pit crew at the end, the yellow right before the last had a blazing stop to get us up front and put us in position.

"All these things just came together and I’m tickled to death. It’s a little overwhelming to be honest.”

Sunday night’s Coca-Cola 600 was the first of four races being held in successive days at Charlotte.

Following the break between Stages 3 and 4, the lead-lap cars pit with Matt DiBenedetto the first off pit road thanks to a two-tire pit stop.

On the restart on Lap 308, DiBenedetto was followed by Joey Logano and Alex Bowman.

After several tries, Truex finally got around DiBenedetto to reclaim the lead on Lap 313 as Johnson moved into the runner-up position.

On Lap 349, Joey Gase spun off Turn 4 to bring out a caution just as teams were setting up for their final round of green-flag pit stops.

All lead-lap cars elected to pit with Johnson the first off pit road. Logano was penalized for speeding during his stop and had to restart from the rear of the field.

On the restart on Lap 354, Johnson was followed by Keselowski, Truex, Elliott and Byron.

Keselowski powered past Johnson on the restart to take the lead as Elliott moved into second while Johnson dropped to third.

With 37 laps remaining, Elliott got around Keselowski in Turns 3 and 4 to take the lead for the first time in the race.

With 25 laps to go in the race, Elliott had built up almost a 1-second lead over Keselowski. They were followed by Johnson, Truex and Bowman.

With two laps remaining, Byron blew a tire and slammed the Turn wall to bring out a caution and send the race into overtime.

Several drivers, including Elliott elected to pit, but Keselowski remained on the track and inherited the lead. On the restart, he was followed by Johnson, Bowman, Blaney and Austin Dillon. Elliott lined up 11th.

After staying out under a late caution, Logano was able to hold off Bowman for the Stage 1 win, his first stage victory of the 2020 season.

Following the break between Stages 2 and 3 and a 30-second moment of remembrance, all the lead-lap cars elected to pit with Bowman again the first off pit road. Kyle Busch was second but was penalized for speeding and had to restart from the rear of the field.

On the restart on Lap 209, Bowman was followed by Truex and Byron.

On Lap 225, Truex went to the inside and finally grabbed the lead away from Bowman. Byron remained close behind in third and Jones fourth.

With 65 laps remaining in the third stage, Truex had built up a 2.6-second lead over Jones as Bowman dropped to third.

On Lap 255, several drivers dropped to pit road to begin a round of green-flag pit stops. Once the cycle of stops was completed on Lap 263, Truex remained the leader, holding a more than 2-second lead over Jones.

With 25 laps to go in the stage, Bowman had moved back into second, about 1.5 seconds behind Truex.

On Lap 275, Matt Kenseth hit the wall in Turn 2 to bring out a caution. Most of the lead-lap cars elected to pit with Truex the first off pit road.

Logano and a handful of others did not pit and he led the way when the race returned to green on Lap 282. He was followed by Harvick, Elliott and then Truex.

With 15 laps remaining in the stage, Logano held a small lead over Truex as Bowman moved into third. With 11 to go, Bowman went to the inside of Truex and moved into the runner-up position.

After maintaining a solid advantage during a round of green-flag pit stops, Bowman easily held off Truex and cruised to the Stage 2 win.

Kyle Busch was third, Byron fourth and Elliott rounded out the top-five.

Following the break between Stages 1 and 2, all the lead-lap cars pit with Bowman the first off pit road. On the restart on Lap 107, Bowman was followed by Kyle Busch and Truex.

With 65 laps remaining in the stage, Bowman had built over a 2-second lead on Truex while Kyle Busch remained in third.

After 150 laps, Truex had cut Bowman’s lead down to about 1.5 seconds. Kyle Busch remained in third, Elliott fourth and Byron fifth.

On Lap 155, several drivers hit pit road to begin a round of green-flag pit stops to ensure they have enough fuel to make it to the end of the stage.

Matt Kenseth was penalized for speeding on pit road during his stop and had to make a drive-thru penalty under green.

Once the cycle of stops were completed on Lap 167, Bowman remained in the lead, followed by Truex and Kyle Busch.

Thanks to a two-tire call on his pit stop, Johnson moved back into the top-10 with 30 laps remaining in the second stage.

With 20 laps to go in the stage, Bowman had expanded his lead over Truex to nearly 5 seconds as Kyle Busch remained in third.

Bowman took the Stage 1 win under caution following a wreck involving Clint Bowyer with three of 100 laps remaining in the segment.

Kurt Busch, who started on the pole, took command early and led the first 20 laps until NASCAR called a competition caution to allow teams to check for tire wear.

During the caution, all lead-lap cars elected to pit with Kurt Busch the first off pit road. When the race returned to green on Lap 28, Busch was followed by Truex, Elliott, Johnson and Reddick.

Johnson lost several spots on the restart after getting loose in the traction compound and moving up the track toward the wall.

With 65 laps remaining in the stage, Kurt Busch maintained a small but steady lead over Truex as Elliott remained in third.

On Lap 49, NASCAR displayed a caution as light rain began covering the area of the speedway. The red flag was displayed on Lap 50 as the rain picked up.

After a little more than an hour rain delay, the race returned to caution and all of the lead-lap cars elected to pit. Bowman was first off pit road thanks to a two-tire pit stop. On the restart on Lap 58, he was followed by Truex and Elliott.

With 30 laps to go in the first stage, Bowman was able to maintain a small but steady lead over Elliott, while Truex dropped to third.

On Lap 83, Truex worked his way back around Elliott to reclaim the runner-up position, about 1.3-seconds behind Bowman.

With three laps remaining in the stage, Bowyer slammed into the Turn 2 wall hard to bring out a caution. The race could not resume before the conclusion of the stage.

Before the race went green, two pieces of ballast fell out of the back of Denny Hamlin’s No. 11 Toyota as he was leaving pit road and driving up the racing groove. Aric Almirola appeared to run over some of the ballast, which damaged his splitter.

That is a serious infraction under NASCAR rules and could result in a four-race suspension of the crew chief, car chief and head engineer at some point this coming week.

Hamlin was forced to pit before the race began to replace the pieces that dropped out of the car. He did not return to the track until the first eight laps of the event had been completed.

Keselowski, Aric Almirola, Timmy Hill and J.J. Yeley started the race from the rear of the field for unapproved adjustments following qualifying. DiBenedetto moved to the rear at the start after moving to a backup car.