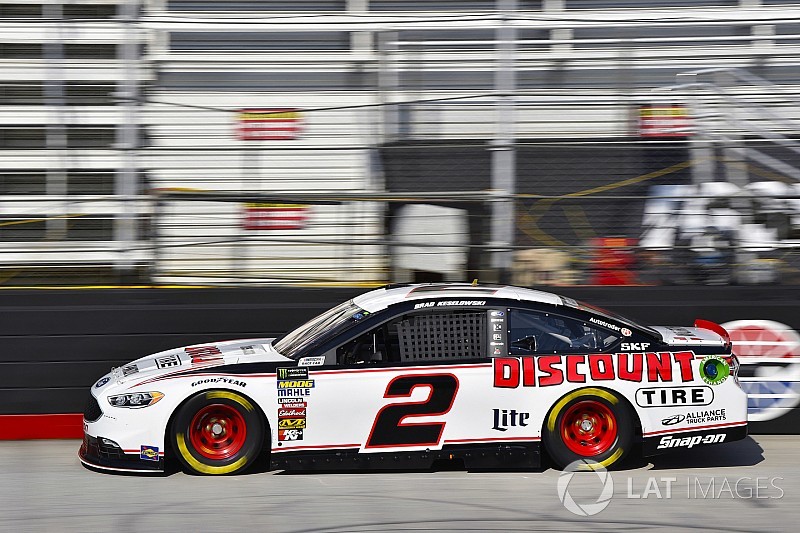 Brad Keselowski came away with the Stage 1 victory as another top contender for the win at Bristol saw his race end early.

Keselowski held off Ryan Newman in a two-lap dash to the finish of the first 125-lap segment. Clint Bowyer finished third, A.J. Allmendinger fourth and Kyle Larson completed the top-five.

Ryan Blaney was leading the race with eight laps left in the stage when ran into the aftereffects of an incident involving Chris Buescher and Harrison Rhodes. Blaney, who led 99 of the 125 laps, saw his race come to an end.

The race got underway about 30 minutes past its scheduled 1 p.m. ET start time due to rain in the area and pole-winner Kyle Busch bolted out quickly to a sizable lead.

On Lap 3, Michael McDowell got loose off Turn 4 and spun, which triggered a nine-car accident. McDowell, Martin Truex Jr. and Chase Elliott received the most serious damage from the incident.

McDowell, who had started in the Top 10, was forced to the garage with quick end to his day.

“It’s just unfortunate. There are no excuses. I was just racing (Daniel Suarez) and got loose underneath him,” McDowell said. “There’s not a lot of grip. It rained all day and that VHT just doesn’t do well without heat.

“I was stuck on the bottom and that was about it. I really hate it for my guys – just to be out this early is really heartbreaking.”

On the restart on lap 10, Kyle Busch led the way followed by Blaney.

Allmendinger spun off Turn 2 to bring the second caution just as Blaney took the lead from Busch. The race returned to green on Lap 23 with Blaney in the lead and Busch close behind him.

On Lap 47, NASCAR displayed the caution and rain picked up around the track. A red flag was displayed on Lap 50.

The race returned to caution after a nearly 26-minute delay. Elliott’s team was penalized a lap for working on his car while the red flag was displayed.

The weather break served as the competition caution so teams were allowed to pit for tires and fuel. Blaney was the first car off pit road and resumed the lead on the restart on Lap 60.

Stenhouse got loose in Turn 3 and spun off Turn 4 to bring out the caution on Lap 62. On the restart on Lap 68, Blaney continued to lead the way followed by Joey Logano.

On Lap 117, Buescher made contact with Trevor Bayne in Turn 3. Bayne started to spin and hit Rhodes in the right rear. Rhodes just shot up the track and Jamie McMurray and Blaney – still the race leader at the time – then drove right into the pile-up.

“It’s obviously frustrating when lapped cars wreck and take the leader out," said Blaney. "That’s unfortunate. They weren’t lap down cars yet, I guess, but I don’t know.  I didn’t really see much. By the time I got away from the car right in front of me they were already turned right up the race track and I was already going to the top. I kind of saw them spinning low and I thought that top was gonna be OK and then they slid back up and got us. That stinks. I thought we had a good car and nothing to show for it.”

The race was placed under a red flag for 6½ minutes to clean the track of debris. Keselowski took over the lead when the race returned to green on Lap 124.

Before the race began three drivers – Kevin Harvick, Kurt Busch and Johnson – all had to start the race from the rear of the field. Harvick and Busch had moved to backup cars and Johnson had an unapproved tire change.

Darrell Wallace Jr.'s Daytona 500 car to be sold at auction