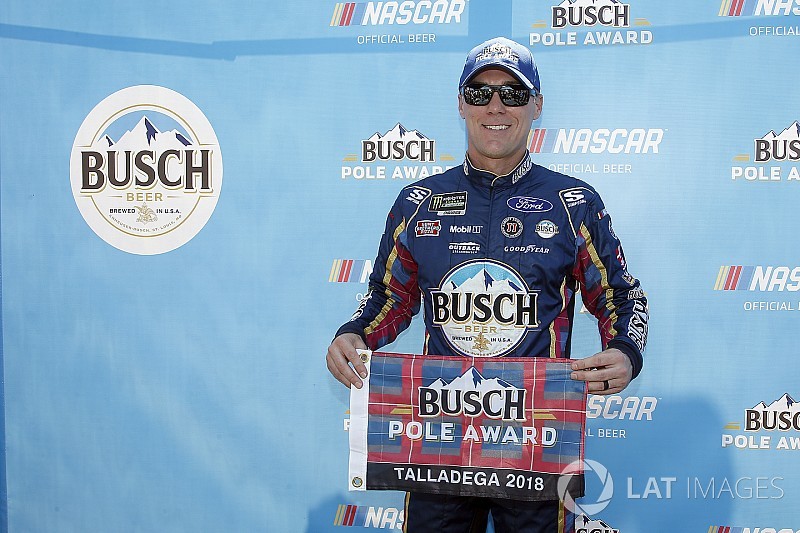 Kevin Harvick may have three wins already this season but he added his first pole on Saturday.

Harvick, the final car to make an attempt in Round 2, posted an average lap speed of 194.448 mph to win the pole for Sunday’s GEICO 500 at Talladega (Ala.) Superspeedway. He just edged his Stewart-Haas Racing teammate, Kurt Busch (194.082 mph), who went out right before Harvick.

The pole is the first this season for Harvick, second at Talladega and 22nd of his Monster Energy NASCAR Cup Series career.

“I’m really proud of our team and the first thing I want to say is a big thank you to Roush Yates Engines, and the guys that work on this car,” Harvick said. “They put so much effort into things like this.

“We’ve really never qualified this well. They’ve made some big improvements obviously over the offseason and then there was the restrictor-plate change overnight. With everything that’s happened, it’s just a huge credit to this team.

“Starting up front will definitely be good.”

Harvick easily bested his competition to lead the way in the first round of qualifying but it was quite the process to get there.

Harvick was the only driver to surpass the 194 mph barrier, with an average speed of 194.275 mph. However, had to abandon his original qualifying attempt when his teammate, Aric Almirola, lost a tire and spun during his attempt.

Harvick’s crew chief, Rodney Childers, believed the driver ran over debris associated with Almirola’s incident and the No. 4 team received permission from NASCAR to return to pit road and changes tires.

“It was a unique position that we were put in,” Harvick said. “Just really proud of everyone at Stewart-Haas Racing. This car is fast.”

Kurt Busch, the 23rd driver out, ended up as the only one to cross the 193 mph barrier in the session (193. 921 mph) and ended up second-fastest. Truex was third-fastest (192.707 mph). Jones was fourth and Elliott completed the top-five.

“I think we we’re trying pretty hard and we may go a little quicker in the second round. If we do go faster, I think everyone will,” Elliott said. “I didn’t get to do as much drafting yesterday as I wanted to do. We come to these places and nobody wants to draft.”

Also advancing to the final round were Hamlin, Logano, Keselowski, Stenhouse, Bowyer, Bowman and Ragan.

Among those who failed to advance to the final round was Kyle Busch, who is attempting to win his fourth consecutive race for the first time in his career. Busch will line up 19th.

Jamie McMurray, Ryan Newman, Daniel Suarez and Ty Dillon will all start Sunday’s race from the rear of the field, regardless of where they qualified.

All four were involved in an accident in practice on Friday, which was triggered when McMurray had a left-rear tire go down and turned in front of Newman, and McMurray’s car lifted up and over Newman’s.

McMurray’s No. 1 Chevrolet ended up barrel-rolling several times before coming to rest on all four tires.

“I’m a little bit sore kind of everywhere,” McMurray said. “The back of my eyes probably hurt the most when I woke up.”

Almirola had a right-side tire go down during his qualifying attempt and ended up spinning in Turn 1. He realized he had an issue developing as he could not get his No. 10 Ford up to speed on his hot lap.

“Something in the rear end broke,” Almirola said over his team radio after the incident.