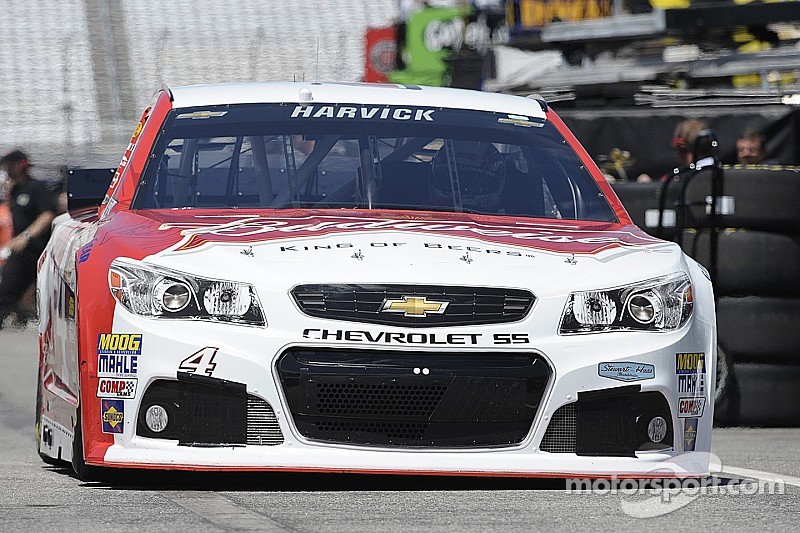 Kevin Harvick goes in search of another Brickyard 400 victory this weekend.

KANNAPOLIS, N.C. (July 22, 2014) – Kevin Harvick grew up racing go-karts in Bakersfield, California, dreaming of his turn to one day emulate his childhood hero Rick Mears, the four-time Indianapolis 500 champion and three-time IndyCar Series champion who also grew up in Bakersfield. His dream was to win the historic Indianapolis 500 at Indianapolis Motor Speedway. But, the driver of the No. 4 Jimmy John’s Chevrolet SS for Stewart-Haas Racing (SHR) saw his career take a different path that led him to NASCAR instead of IndyCar.

The path that led to NASCAR meant that Harvick would have to slightly amend his dream of winning at Indianapolis. Instead of winning the Indianapolis 500, he would instead try to win the NASCAR Sprint Cup Series Brickyard 400.

In 2003, in just his third attempt at the Brickyard 400, Harvick made his dream of winning at Indianapolis Motor Speedway a reality, and he did it in grand fashion. Harvick won the pole with a speed of 184.343 mph, led 33 laps and beat runner-up driver Matt Kenseth to the finish line by 2.758 seconds.

Since 2003, the 14-year Sprint Cup veteran has come close to scoring additional wins at Indianapolis. In 2006, Harvick started 10th, led 18 laps and finished third. In 2010, he started ninth, led five laps and finished runner-up to Jamie McMurray by less than two seconds.

Harvick would like nothing more than to score his second Sprint Cup win at Indianapolis in Sunday’s Brickyard 400. A win Sunday also would give Harvick his third win of the 2014 Sprint Cup season. He scored his first Sprint Cup win of 2014 in the season’s second race at Phoenix International Raceway and his second win at Darlington (S.C.) Raceway in the Southern 500.

Under the new Chase for the Sprint Cup format, the top-15 drivers with the most wins over the first 26 races will earn a spot in the Chase. The 16th position will go to the points leader following the Sept. 6 Federated Auto Parts 400 at Richmond (Va.) International Raceway if that driver does not have a victory.

While Harvick and his No. 4 team are virtually locked into the Chase for the Sprint Cup field, gaining additional bonus points from wins is now their top priority through the next seven races starting this weekend at Indianapolis.

KEVIN HARVICK, Driver of the No. 4 Jimmy John’s Chevrolet SS for Stewart-Haas Racing:

What makes Indianapolis unique or special to you?

“Indianapolis is a very unique track. For me, it’s kind of a cool place to go to as I always wanted to grow up racing IndyCars. With Rick Mears being from Bakersfield (California), he was a hometown, childhood hero as we were all racing go-karts. So, to win there back in 2003, and be able to kind of achieve your childhood dream in a sense, but in a stock car, was a great moment. Going back to Indy is just a very historic racetrack where it’s a lot of fun to be a part of the event. It’s always a place where  you want to win, but it’s fun to just go there and race to be a part of the next era of its history.”

What is your favorite Brickyard moment?

“My favorite Brickyard moment is definitely the win. I always tell people that the best part of the win is not kissing the bricks or taking the checkered flag, but the best part of the win is driving around in the Corvette after the race. You can tell who the fans are who have been at Indy for a long time and know about the victory lap. So just driving around and reminiscing about what you just achieved with the team owner and DeLana (Harvick, wife) is just a cool 15 minutes.”

What does it take to be successful at Indianapolis?

“Indianapolis is a very hard racetrack to pass on. Obviously, with how narrow the racetrack is and how fast the cars are going, you have to try and maintain your track position all day. It takes really everything – you have to have great motors, good handling and all the things you hear about at a lot of racetracks. You can’t overcome a lack of horsepower or a lack of downforce and I feel like we’ve done a good job with both of those things all year. Hopefully, we can find the right handling package to go with the great pieces and parts that we have to go on the cars.”

Where does Indy rank on your list of prestigious wins in the Sprint Cup Series?

“Well, I think there are probably two rankings. One is just that personal feeling of what you wanted to achieve as far as when you were a child. So, for me to achieve that at Indianapolis was pretty awesome. From a stock car racing career standpoint, I think it’s right behind the Daytona 500. I’d say the Southern 500 and the Brickyard 400 are probably right there together, too.”

A.J. Allmendinger goes in search of Indianapolis glory with JTG