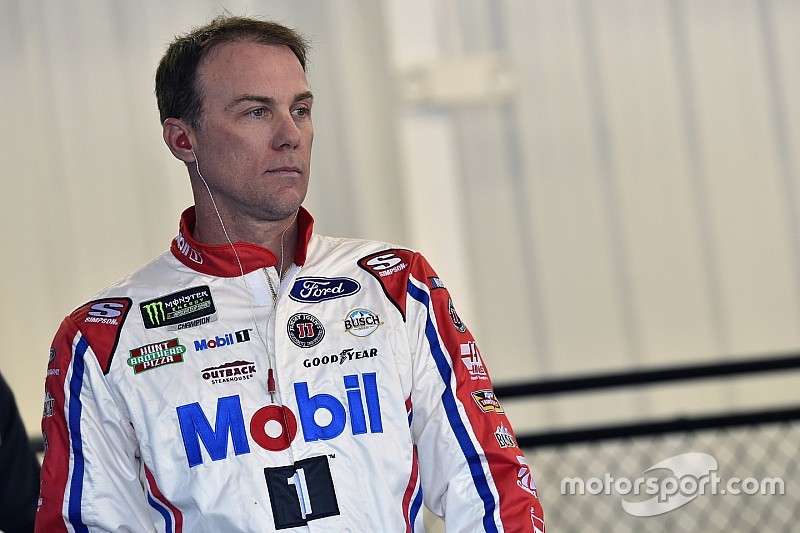 Kevin Harvick's 2018 playoffs are off to a rocky start at Las Vegas Motor Speedway.

On Lap 147 of the 267-lap race, Harvick cut down a right front tire entering Turn 1. His No. 4 Stewart-Haas Racing Ford launched up the track, slamming the outside wall and ending his once promising day.

After being checked and released from the infield care center, the former series champion did not mince words. "Well, there was something wrong from the time we put the tires on," said Harvick. "It was like Russian roulette every time you put these piece of crap tires on and try to drive around the race track. One time it is tight, one time it is loose, one time they are blistered. We had a great car and then you put a set of tires on it and you can’t hardly make it through the field. I just hate it for everyone on our Mobil 1 Ford.”

Harvick will finish 39th, but due to all the bonus points he amassed during the regular season, the No. 4 remains on the right side of the cut-off line. Regardless, Harvick was not in the mood to look at the bright side of things, telling NBCSN, "I am not happy about anything right now."

Goodyear's Stu Grant defended the tires they brought to LVMS, saying, “We have not had any complaints about inconsistent tires. Actually our performance has been pretty darn consistent.

But he was not the only driver who's day ended on Lap 147. When he shot across the track and into the outside wall, pole-sitter and fellow playoff driver Erik Jones had nowhere to go but directly into the back of that No. 4 machine.

He will finish 40th.

"It’s just unfortunate – we didn’t have the best-handling DeWalt Camry today and thought we were going to end up okay. We were going to finish top-10 no matter what. It’s unfortunate we had that happen, nothing Kevin (Harvick) could do and nothing I could do unfortunately. Not the situation we needed to be in, we didn’t have any bonus points and we’ve got some work to do now. I don’t think we have to win, but we definitely need to run really well here at Richmond and the Roval so we’ll keep at it, but it’s just unfortunate that had to happen.”

Jones is in a much more precarious position than Harvick and nows he is on the hot seat to make up this lost ground in the next two races, or he could very likely face elimination in Round 1 of the playoffs.

“We have to run well at Richmond and the Roval now. I thought it was going to be a pretty relaxed day. We thought we’d be finishing in the top-10 today. It’s unfortunate we’re even behind. We don’t want to be in this spot and nothing we can do to prevent it now. We have to move forward.”