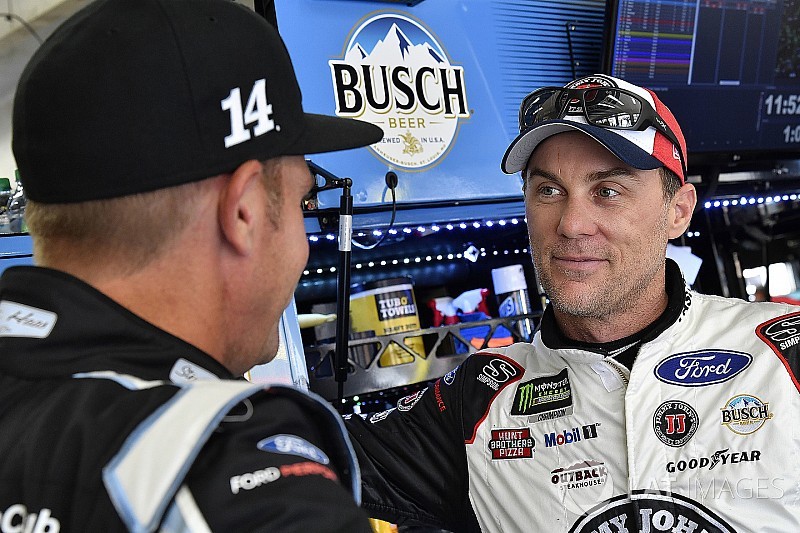 Clint Bowyer was the only driver to take two new tires during the break between Stages 2 and 3 of Sunday’s FireKeepers Casino 400 at Michigan International Raceway, with Harvick – with four new tires – lining up alongside him when the final stage went green on Lap 126.

Rain had been threatening for most of the day and it seemed like the race – now official after the completion after Stage 2 – could end at any time.

On the restart, Bowyer was able to hold off Harvick, his Stewart-Haas Racing teammate, for a lap and as the second began, Ricky Stenhouse Jr. spun off Turn 2 to bring out a caution to halt Harvick’s advance.

While the race was under caution, the rain finally arrived and the race was called after Lap 133 of the scheduled 200.

“I’ve been on both sides of this. If you’re going to have racing luck work against you, you want to at least stay on your own team,” Harvick said. “It worked the other way at Dover. He was kind of in the same position, we went back green. Today, it worked out for him.”

Harvick did not appear overly upset with how the circumstances played out. Had the rain held off, he would have likely gotten around Bowyer. Had Stenhouse not brought out a caution, he may have done the same thing.

“The exciting thing to me is we did a great job on pit road, were able to maintain the track position, beat everybody off of pit road,” Harvick said. “Obviously those guys took two tires and a gamble. It rained for them in three laps – paid off pretty good.”

Harvick didn’t think he was any easier on Bowyer on the final restart because he was a teammate.

“I wouldn’t have raced anybody any different.”