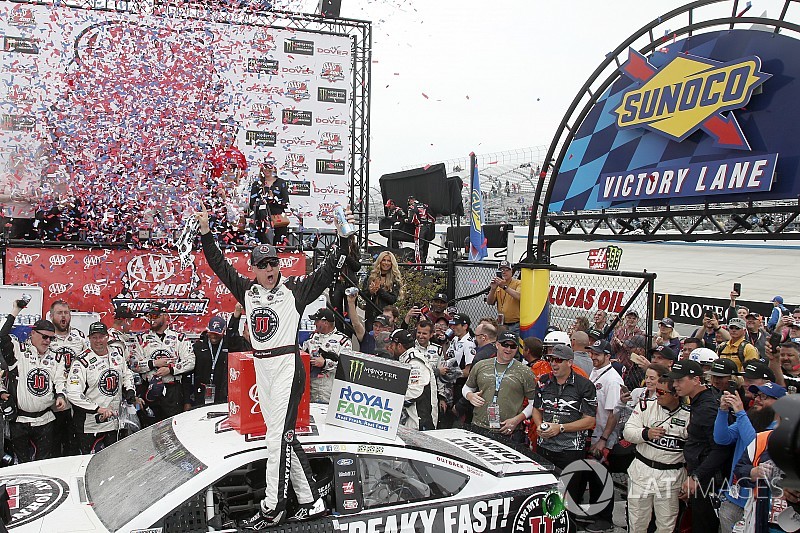 Kevin Harvick’s fourth Monster Energy NASCAR Cup Series of the season is the first at Dover for Ford since the 2011 season.

Following a 40-minute rain delay, Harvick passed Stewart-Haas Racing teammate Clint Bowyer for the sixth and final time with 63 of 400 laps remaining and went on to a dominating victory in Sunday’s AAA 400 at Dover (Del.) International Speedway.

"Well, the first thing I need to do is thank everybody on my team, everybody at Stewart-Haas Racing, Roush Yates Engines, everybody from Ford - everyone who continues to put the effort that they do in these cars," Harvick said in Victory Lane. "Three cars in the top-five says a lot about where we are as a company.

"It's fun racing your teammate. That says a lot about our company and one of your good friends as well."

The win is Harvick’s fourth this season, 41st of his career and second at Dover (his first came in the 2015 season).

Harvick’s victory is the first at Dover by a Ford team since Matt Kenseth’s victory in this race seven years ago.

During the break between Stages 2 and 3, Harvick was the first off pit road and remained in the lead when Stage 3 went green on Lap 249. He was followed by Keselowski, Kyle Busch, Bowyer and Johnson.

Cody Ware in the No. 51 Chevrolet wrecked on Lap 254 coming off Turn 4 to bring out a caution. Most of the lead-lap cars remained on the track but Johnson, Joey Logano and Ricky Stenhouse Jr. were among the drivers who elected to pit.

Harvick remained out front on the restart on Lap 260.

On Lap 270, Kyle Busch’s No. 18 Toyota fell off the pace and he had to wait several laps before he could make it down pit road. A caution was eventually displayed on Lap 272.

“Especially after restarts it was really, really bad,” Busch said after he took his car to the garage. “I was trying to ride it out and see if we’d make it to the end. At first I thought it was the engine, but it turned out to be the drivetrain.”

Most of the leaders pit during the caution as several drove through fluid that was dropped on the track by Busch. Keselowski was the first off pit road, thanks to a two-tire pit stop, but Stenhouse had pit under the previous caution and stayed out, leading on the restart on Lap 282.

With 115 laps to go, Bowyer moved up into the second position behind Stenhouse, with Logano, Truex and Harvick close behind.

Bowyer got around Stenhouse with 104 to go to take the lead for the first time in the race.

On Lap 315, a caution was displayed for rain. It had been drizzling for several minutes before it finally picked up and started wetting the track. On Lap 319, NASCAR had the cars come down pit road and displayed the red flag.

The race returned to yellow following a 41-minute stoppage of action and all of the lead-lap cars headed down pit road.

Bowyer was the first off pit road followed by Harvick, Truex, Suarez and Blaney. Keselowski had a slow pit stop and came off pit road in ninth. The race returned to green-flag conditions with 75 laps remaining.

Two laps later, Suarez moved into the third position, his highest position of the race to this point.

On Lap 338, Harvick got around Bowyer on the high side for the lead – the sixth time he’s led in the race.

With 50 laps remaining, Harvick had moved out to a nearly 3-second lead over Bowyer, with Suarez not far behind.

With 10 to go, Harvick’s advantage over Bowyer exceeded five seconds and ended up being 7.450 seconds at the finish.