Kevin Harvick has the fuel and takes the win at Michigan

Kevin Harvick rallied from an early flat-tire then went the distance on fuel to win Sunday’s NASCAR Cup Series race at Michigan. 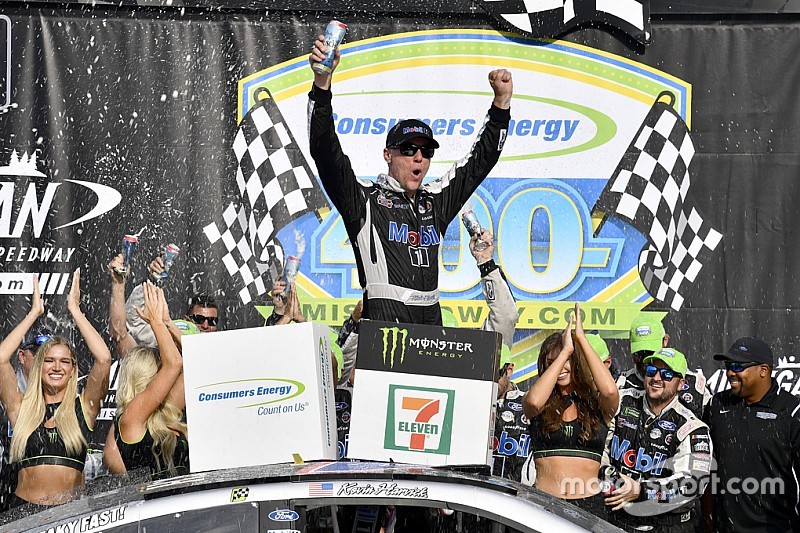 Harvick had shown to have a fast car all weekend but had to pit in the first stage under green for a flat tire.

He rallied back in the final stage, took the lead with 17 to go and stretched his fuel the final 49 laps, holding off Denny Hamlin to win Sunday’s Consumers Energy 400 at Michigan International Speedway.

As Harvick took the checkered flag, cars ran out of fuel all over the track, jumbling the final running order.

The win is Harvick’s second at Michigan in the last three races and second of the 2019 season. It’s also his 47th career victory.

"That's way better than a burnout," Harvick said after taking ride with his son, Keelan riding shotgun in the No. 4 Ford. "We've spent the last couple summers together. He told me before the race, 'If you win, I get to ride in the car again, right?'

"It takes a lot of people to make these cars go around winning races, which is what it's all about."

Asked what he thought of the ride, Keelan said, "It was kind of scary at first but then I liked it."

Following the break between Stages 2 and 3, several lead-lap cars elected to pit but Kurt Busch elected to stay out and led the way when the race returned to green on Lap 128.

He was followed by Joey Logano, Ryan Blaney, Byron and Paul Menard. Kyle Busch was the first off pit road of those who pit and lined up 16th.

Logano powered around Kurt Busch off Turn 2 after the restart to take the lead for the first time in the race.

On Lap 133, Spencer Boyd, making his first Cup Series start, spun off Turn 4 and pounded the wall to bring out a caution.

On the restart on Lap 137, Logano continued to lead followed by Kurt Busch, Byron, Blaney and Larson.

Clint Bowyer hit the wall on Lap 138 after the field briefly went four-wide on the restart, which brought out another caution.

“Somebody got in the back of me. As soon as it happened, I was just along for the ride,” Bowyer said. “I don’t know. We have to get something figured out with these race tracks.

“We are really fast by ourselves, practice and qualifying really well, in the top-five almost every single time but then we start the race and don't make the grip we need to compete.”

Several cars elected to pit under the caution but Logano remained on the track and in the lead when the race restarted on Lap 142.

Ricky Stenhouse Jr. had a tire go down and spun off Turn 4 to bring out another caution on Lap 149.

All of the lead-lap cars elected to pit with Blaney the first off pit road thanks to a fuel-only stop. On the restart on Lap 153, Blaney led the way followed by Brad Keselowski and Logano.

Logano quickly worked to get around Blaney to retake the lead after the restart but Blaney did not go quietly as the two battled side-by-side before Logano eventually pulled away.

After 160 laps, Logano maintained a small lead over Blaney with Keselowski close behind in third.

On Lap 173, Harvick had moved up to second behind Logano. Several drivers were concerned if they had enough fuel to make it to the finish if the race remained green.

With 25 laps to go, Logano held a small advantage over Harvick. Keselowski was third, Hamlin fourth and Blaney had dropped to fifth.

On Lap 183, Harvick got a big run off Turn 4 to get around Logano and move into the lead.

Denny Hamlin: "The fastest car won the race" at Michigan