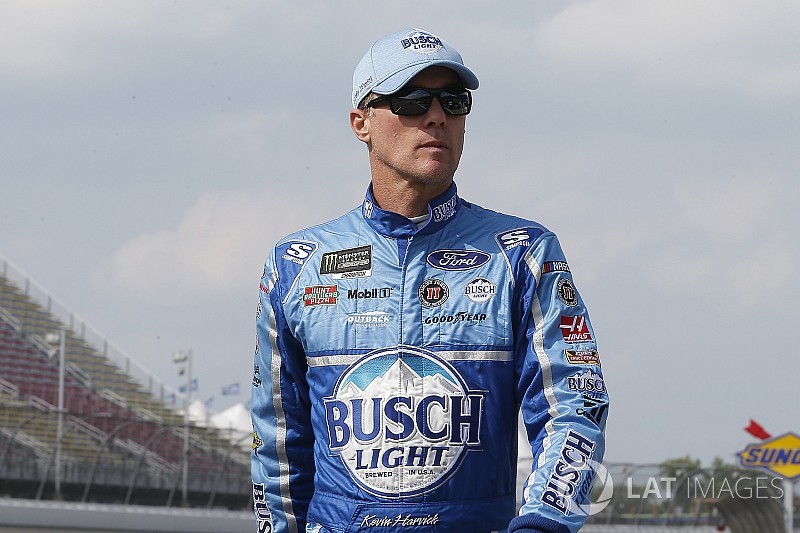 Kevin Harvick seems to have enjoyed a career’s worth of memories in just the first 23 races of the 2018 Monster Energy NASCAR Cup Series season.

And he doesn’t plan to take any of it for granted.

Harvick picked up his seventh win of the season Sunday at Michigan International Speedway but even more importantly, he was able to share the victory celebration with his six-year-old son, Keelan.

After Harvick the win, Keelan met his dad near the start/finish line and walked across the track to grab the checkered flag from the flagman. He then joined his dad in his No. 4 Ford and the two drove down the frontstretch waving to the fans.

“It’s pretty cool to look over there on your victory lap and see your six-year-old in the passenger seat being able to enjoy it with you,” Kevin said. “That was definitely way up there on the bucket list of things that you didn’t expect. That was pretty neat.”

Harvick, 42, has already won more races this season than he has in any of his 17 previous years of his Cup series career. He has also won at least once on all but two of the current tracks on the series schedule (he lacks wins at Pocono and Kentucky).

Since NASCAR’s playoff format debuted in the 2004 season, Harvick has never entered the 10-race battle to the championship with more than three wins.

Prior to his move to Stewart-Haas Racing and pairing with crew chief Rodney Childers in 2014, Harvick’s best season performance was finishing third in the series standings on three different occasions. Since joining SHR, he has finished third or higher three times, including capturing the 2014 series championship.

“It’s been an incredible amount of stuff and wins packed into almost five years now. For me, I’m just enjoying every moment because you never know when it’s going to go the other way, and right now our guys are just doing a great job, and I’m enjoying everything.”

And why wouldn’t he? After all, there is the legitimate chance of adding a second series championship at season’s end.

Still, the most difficult part of the season still lies ahead.

“We’re three weeks away from the playoffs, and you don’t want it to shut off, you want it to keep going,” Harvick said. “The motivation is to not let things slip through the crack, and they’re covering all the details, and especially my group of guys that we’re going on our fifth year together.

“That experience and those attention to details of things that they do is second to none, and you see it week after week. You look in the win column, and we’re capitalizing on those fast cars.

“That hasn’t always happened over the last four years, and I think this year we’re making those moments count and getting wins out of them.”

Brad Keselowski: “It’s nice just to be able to have a clean race”