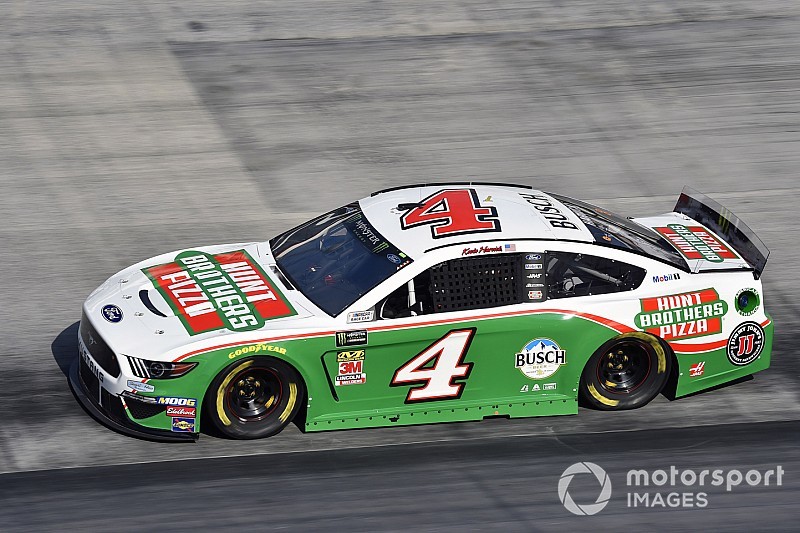 There was nothing about his 13th-place finish that Harvick felt like discussing after the race but his journey from multiple pre-race inspection failures, to falling four laps down and rebounding to a near top-10 finish deserves a closer look.

Harvick had shown exceptional long-run speed in his No. 4 Stewart-Haas Racing Ford over the weekend and appeared to be a contender for his first win of the season.

But his day went south quickly when his car failed pre-race inspection three times before finally passing on the fourth attempt.

The three failures came with several penalties – starting the race from the rear of the field, having his race engineer ejected from the event and after taking the green-flag, Harvick would have to make a pass-thru penalty down pit road.

On a fast short track like Bristol, Harvick would likely lose a couple laps before he could even begin racing his way from the back.

Harvick, however, got a break almost from the start. As he was serving his penalty on the first lap, a multi-car wreck erupted on the track, almost immediately placing the race under caution.

The caution kept Harvick locked in one lap down – not how you want to start a 500-lap race, but not nearly as bad as it could have been.

Harvick was running 31st and a lap down when another caution came out on Lap 39. Harvick wanted to take the wave-around to get back on the lead lap but not all of the lead-lap cars elected to pit. So, he made his own four-tire pit stop.

On Lap 60, more trouble came Harvick’s way when he was forced to pit after he believed he had a loose wheel. Once he returned to the track, Harvick was in 35th and four laps down.

He would complete the first 125-lap stage in the 31st position.

After the stage break, Harvick restarted in 29th and by Lap 214 he had made up one lap.

By the conclusion of the second stage, Harvick was up to 22nd.

Following the break between Stages 2 and 3, Harvick restarted 21st and began racing to un-lap himself on the track. By this point, his No. 4 Ford was one of the fastest on the track.

On Lap 370, Harvick got around the race leader and was running just one lap down. But while racing hard on the track he tagged the wall, which brought out a caution and returned to two laps down.

By Lap 435, Harvick had used the wave-around to gain a lap back and was running 20th, one lap down.

With Harvick running as the first car one lap down, Kyle Larson hit the wall to bring out a caution with 22 laps left in the race. Harvick earned the free pass and finally returned to the lead lap.

After pitting for four tires and fuel, he lined up in 17th on the restart with 14 laps remaining.

Over the final 14 laps, Harvick gained four more positions on the track to take the checkered flag in the 13th position.

When the wild day was done, Harvick remained fourth in the series standings with an unspectacular result. The journey to get there, however, was a remarkable one.

Jimmie Johnson: “I feel like we’ve stopped the bleeding”

Matt DiBenedetto: “It’s exciting to climb the ladder” with LFR