© 2021 Motorsport Network. All rights reserved.
TV Buy tickets Store
Previous / Alonso: "It's going to be a privilege for me to drive a NASCAR car" Next / Tony Gibson's goal with Harvick this weekend: "Don't screw it up"
NASCAR Cup / Phoenix II / Qualifying report

Kevin Harvick couldn’t have bounced back any better. 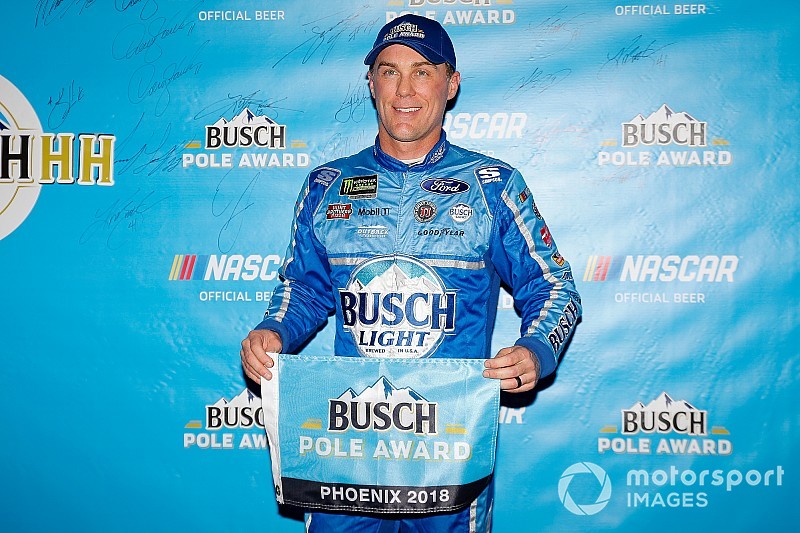 Without his crew chief and car chief for the final two races of the season following a NASCAR penalty this week, Harvick save the fastest lap of the day for the final session of Friday’s qualifying.

Harvick had won last weekend’s race at Texas and earned an automatic berth in the Championship 4 but lost that privilege as part of the penalty. He was also stripped of 40 points.

It is still possible for Harvick to advance on points to Homestead but it will be more difficult. Winning Sunday’s race will again lock Harvick into the Championship 4.

“It’s pretty awesome to see a group of people to come together to fill the gap during the suspensions,” Harvick said. “Like I told them over the radio, everybody on this (team) has been there before and we know what we need to do.

“This is a great race track for us. I really wasn’t expecting that – our cars are usually a lot better in race trim than qualifying trim. I just got fortunate to hit a good lap there and it came at a good time.”

Told some would say the wrestler comes out in these situations when he’s back into a corner, Harvick said, “I don’t need to tell you about it, you can look at the scoreboard.”

The pole is Harvick’s fourth of the season and 25th of his Monster Energy NASCAR Cup Series career.

Elliott went out early and led the way in the second round with an average lap speed of 139.411 mph – the fastest lap made on the track to this point on Friday.

Also advancing to the final round were Bowman, Jones, Harvick, Blaney, Stenhouse, Keselowski and Logano.

Among those failing to advance were Martin Truex Jr., who got knocked out in the final 30 seconds by Keselowski; Kurt Busch, Clint Bowyer, Matt Kenseth, Aric Almirola, Jimmie Johnson and Ryan Newman.

“It wasn’t bad,” Bowyer said. “We’ll be alright. We just need a good day tomorrow in practice and we’ll go off on Sunday.”

Kenseth ended up the surprise leader of the first 15-minute qualifying session with an average lap speed of 138.313 mph.

Rounding out the Top 10 were Stenhouse, Logano, Byron, Keselowski and Jones. Jones had been fastest in Friday’s only practice session.

It took four tries for Truex’s No. 78 Toyota to clear pre-qualifying inspection on Friday, which resulted in the ejection of his car chief for the remainder of the weekend.

Truex finally made it on the track with time to spare and posted the 21st-fastest speed.

Among those who failed to advance to the final round were Chris Buescher, Daniel Suarez, Ty Dillon, Darrell Wallace Jr. and David Ragan.

Take a virtual lap around ISM Raceway with NASCAR Heat 3:

Alonso: "It's going to be a privilege for me to drive a NASCAR car"

Tony Gibson's goal with Harvick this weekend: "Don't screw it up"