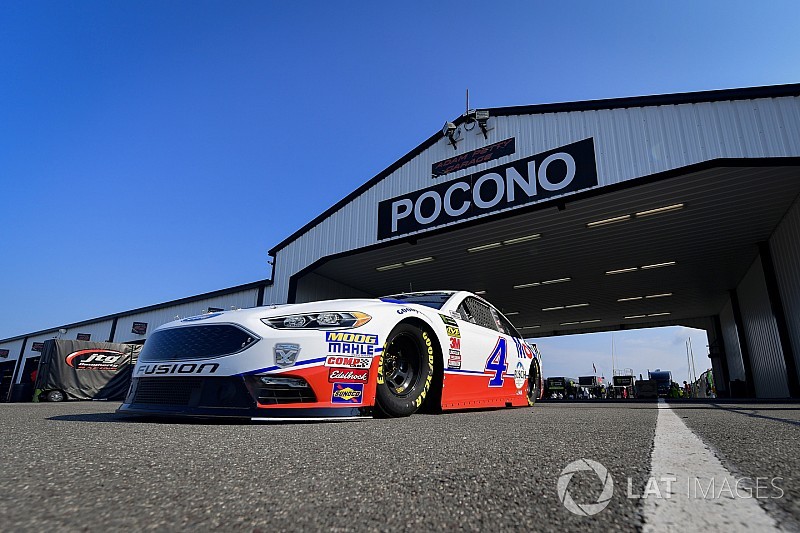 Kevin Harvick started in the back at Pocono Raceway and went right to the front but then had to try to do it all over again.

Coming from the back of the field twice in one race was too much even for the fastest car in the field and Harvick ended up fourth in Sunday’s Gander Outdoors 400.

Pocono is one of just two tracks in the Monster Energy NASCAR Cup Series (Kentucky is the other) on which Harvick has not won a race. He is tied with Kyle Busch – Sunday’s race winner – with the most wins (six) in the series this season.

“It was eventful,” Harvick said. “I think we went to the back twice and made our way back to the front each time.

“We made a good race out of it, but it is hard to swallow on a day like that when our Mobil 1 Ford was the class of the field.”

Harvick was set to start Sunday’s race from the pole but his was one of 13 cars whose qualifying speeds were disallowed when their cars failed post-qualifying inspection on Saturday. That left him starting from 29th.

It was clear from the drop of the green-flag, however, Harvick was still going to be hard to beat for the win.

Nine laps into the race, he was already running in the Top 10. Crew chief Rodney Childers had Harvick short-pit in the first stage to put him in position to get to the front in Stage 2.

The strategy worked and he powered to the Stage 2 win over Chase Elliott.

During a pit stop under caution on Lap 122 of the scheduled 160, Harvick made contact with Stewart-Haas Racing teammate Aric Almirola as both were exiting pit road. The damage required Harvick to pit again for repairs.

On the restart, Harvick lined up in 30th and a quick caution less than a lap later left him in 27th with 28 laps remaining.

There didn’t appear to be enough time to rally again to the front but thanks to two cautions, a red-flag Harvick had made his way all the way back to sixth before the race was sent into a two-lap overtime.

On the restart, Harvick charged one last time as Busch raced three-wide with two of his Joe Gibbs Racing teammates for the win, but he could only get to fourth at the checkered flag.

“You never know what is going to happen on these days,” Harvick said. “It is hard to put them together and you win some and lose some.”

Wallace: Pocono crash "scared the hell out of me"