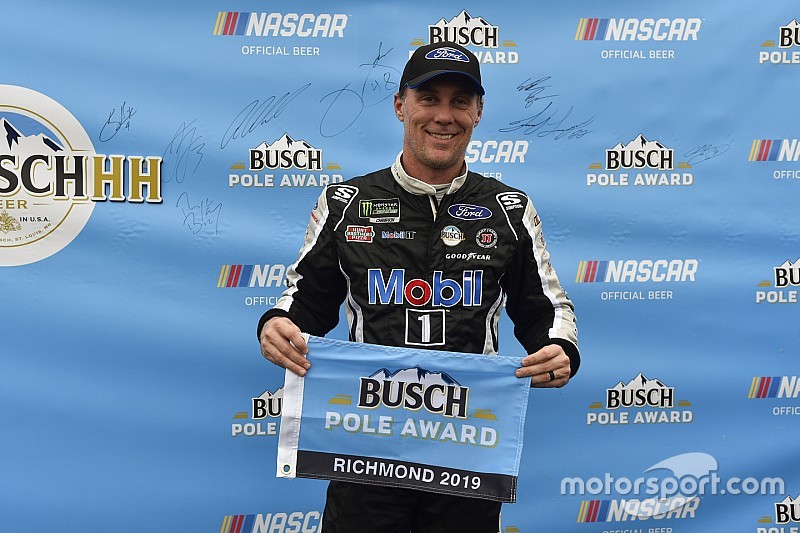 Harvick ended a streak of eight different pole winners to open the 2019 season by capturing the pole for Saturday night’s Toyota Owners 400 at Richmond (Va.) Richmond.

The pole is the second of the season for Harvick and 27th of his career and comes.

Harvick, who led the Cup series with eight victories last year, is still looking for his first win of the season. His average lap speed of 124.298 mph topped Erik Jones (124.081 mph) in the final round.

“I’m just pretty proud of everybody on the No. 4 team and at Stewart-Haas Racing,” Harvick said. “Last week was a success from a speed standpoint. That was the first week we were able to have the speed to be able to win the race.

“We had a lot of things go wrong, but you’ll have those days. The most important thing was the speed. We did a great job today. I didn’t think it was a perfect lap from my standpoint, but I was to get in the throttle on the exit to the corner and put down a decent lap.

“You just have to go faster than everybody else.”

Kyle Busch powered to the top of the leaderboard in the second five-minute session of qualifying.

Also advancing to the final round were Logano, Kurt Busch, Elliott, Buescher, Suarez and Johnson.

Larson, who was second-fastest in the first round, ended up 14th.

Among the others who failed to advance were Aric Almirola, Alex Bowman, Ricky Stenhouse Jr., Denny Hamlin, Clint Bowyer and William Byron.

Kurt Busch led the way in the first five-minute round of knockout qualifying, the first time he’s advanced out of the first round in three races.

Rounding out the top-10 were Harvick, Jones, Bowyer, Suarez and Truex.

Friday was the first time NASCAR has used three, five-minute rounds for qualifying.

Among those who failed to advance to the second round were Ryan Blaney, Bubba Wallace, Ty Dillon, Ryan Newman and Michael McDowell.

“Probably not a good thing to wait until the last car to go out on a green race track,” Blaney said over his radio following the first round.

Four drivers in top-10 at Richmond lose their starting positions