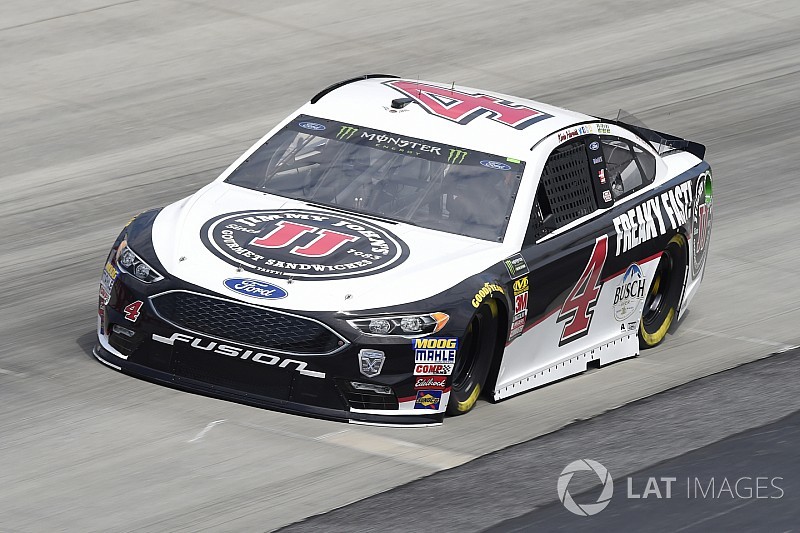 Kevin Harvick retook the lead with 12 laps remaining and held on to win Stage 1 at Dover as several drivers ran out of fuel.

“Everything is going pretty good,” Harvick said over his team radio. “We started fuel early which left us in a good position at the end of the stage.”

Several drivers – including Denny Hamlin, Erik Jones and Ryan Newman – ran out of fuel just as the first 120-lap stage came to an end.

Harvick took an early lead in the race but a spin by Michael McDowell after contact with Darrell Wallace Jr. off Turn 4 brought out the first caution on Lap 4. “He just ran into me,” McDowell said over his team radio.

The race restarted on Lap 8 with Harvick still in command.

By Lap 15, Kyle Busch was complaining of a bad vibration and didn’t think the engine of his No. 18 Toyota was going to be able to make it the entire race. “10-4, just do whatever you can with it,” Busch’s crew chief, Adam Stevens, told his driver.

The engine on Corey LaJoie’s No. 72 Chevrolet let go on Lap 20 in a giant plume of smoke on the backstretch to bring out the second caution.

Austin Dillon was the first off pit road but Alex Bowman and Kyle Larson remained on the track – having both pit under the previous caution – they made up the front row on when the race returned to green on Lap 26.

Keselowski moved up to the second position on Lap 43 as Larson began to fall back on slightly older tires. Keselowski got around Bowman and took the lead in the race for the first time on Lap 49.

With 40 to go in the stage, Keselowski continued to hold a small advantage over Martin Truex Jr., followed by Harvick, Kyle Busch and Hamlin.

On Lap 97, Truex hit pit road under green with a flat right-front tire. He was a lap down when he returned to the track. Larson also stopped at the same time but had an uncontrolled tire penalty, which left him three laps down after he served his penalty.

Several teams were close on fuel as Stage 1 got down to 20 laps remaining, with many crew chiefs asking their drivers to save some fuel.

Bowman, who stayed out on the previous caution with Larson, pit under green with 15 to go.

On Lap 108, Harvick powered around Keselowski to re-take the lead.

Paul Menard hit pit road with 10 laps remaining with a possible flat tire but ended up taking his No. 21 Ford to the garage.

Before the start of the race, three cars – those of pole-winner Larson, Bowman and Austin Dillon – had to drop to the rear of the field for the start.

Larson and Bowman’s car failed pre-qualifying inspection three times and each team had their car chief ejected from the track. Dillon was penalized for having a non-compliant splitter. LaJoie also started from the back due to an engine change on Friday.