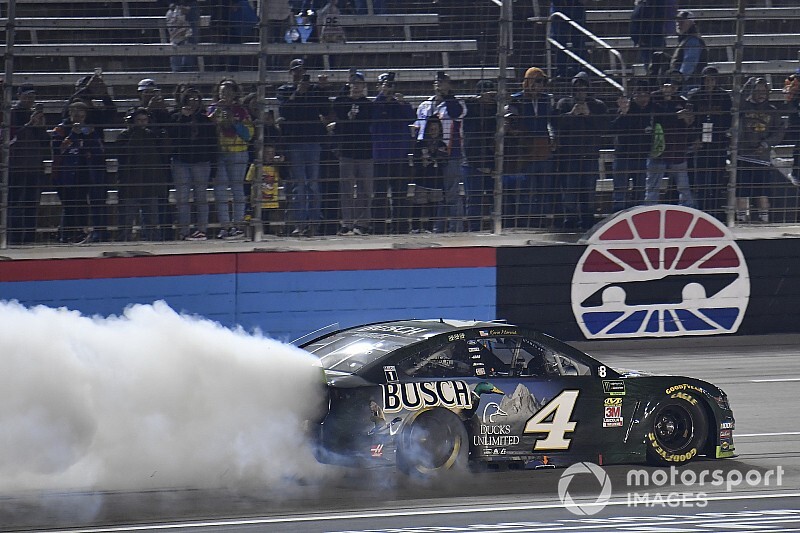 Kevin Harvick and his No. 4 Stewart-Haas Racing team have practically come full circle since the start of the 2019 NASCAR Cup Series season but it’s been a bumpy ride.

While Harvick has ended up in a familiar place – among the four drivers who will compete for the series championship at Homestead – the trip there has been unlike any of Harvick’s previous four.

The 2019 season was already going to be taxing enough with the introduction of a new aero package that would greatly alter the style of racing, particularly in what had been seen of late on intermediate tracks.

When the season began, some teams were off and running in the right direction while others struggled. Harvick’s team was among the latter.

It wasn’t as if the No. 4 team was performing poorly, just not at the standard which they have shown in recent seasons. In the season’s first 10 races, Harvick led laps in just three of them.

“I think I’ll take as much responsibility for that at the beginning of the year than anything,” Harvick’s crew chief, Rodney Childers, said following Harvick’s win Sunday at Texas. “We looked at a lot of different things going into the year. We went to the Vegas test, and we decided to go different ways on different things.

“You know, obviously you have to pick a direction, right, and we picked a direction, and it wasn’t the right direction, but you’ve got cars built that are six weeks out and then you’ve already went through six, seven races before you can even react to anything.

The good news for No. 4 team was even though it wasn’t winning, it continued to run well enough to remain high in the series standings and in no danger of missing the playoffs.

At times, the issues that arose were frustrating to get a handle on, but more often than not, Harvick was still managing top-10 finishes.

“You can’t just change things on the fly. You can’t rebuild cars. As we’ve learned, obviously all of our drivers got better, our teams, the set-ups, all that stuff,” Childers said. “You want to win as many races as you can just like last year, but on the other hand, you need to be right in the second half of the year.

“It was a big learning curve for all of us and something that we just had to work through.”

Getting back to Victory Lane

And once they did, the results began showing much more dramatically.

Harvick earned his first win of the season at New Hampshire in July, out-dueling Denny Hamlin down the stretch.

That was followed by another win three weeks later at Michigan with a similar late-race flurry. Three weeks after that came a much more Harvick-esque dominating performance in a win at Indianapolis Motor Speedway.

Harvick performed well in the playoffs (his worst finish was 17th at Talladega) but didn’t push through to Victory Lane again until Sunday at Texas, again in dominating fashion. This win brought a much bigger prize – automatic advancement into the Championship 4 at Homestead.

Once again, Harvick will have a chance to compete for a series championship in the winner-takes-all format.

The journey back to Homestead-Miami Speedway, however, was a trying one.

“I don’t think we’ve run as well as we’ve probably wanted to run week-in and week-out compared to the things that we expect,” Harvick said. “But this particular year has been neat for me to sit back and watch the evolution of how we progressed with the race cars, how the conversations have progressed, how my theories and things that I think are right and wrong have changed.

“It’s such a process of going to all these different race tracks. You know, there’s just a lot of choices of what you can do to the car and the things that you do, and not being the dominant car on the race track has made us work harder.

“It’s been a good character-building year to have to battle in order to get yourself in position.”

And here they are, right back in the Championship 4.