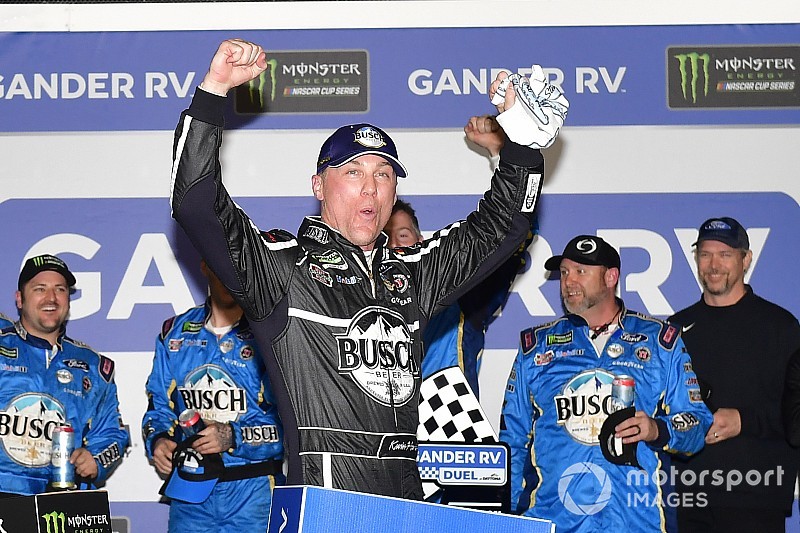 Kevin Harvick was in an enviable position.

After moving his way into the lead, Harvick led the final 44 of 60 laps keeping Ricky Stenhouse Jr. at arm’s length to win the first of two 150-mile Daytona 500 qualifying races Thursday night at Daytona International Speedway.

“Our Ford was fast and I had Stenhouse and (Menard) behind us and we wanted a Ford in Victory Lane,” Harvick said. “I’m just glad I came out on the right side of it and everything is not torn up.

“I have to thank everybody who has touched this superspeedway cars – they’re great. Switching over to the Mustang, it’s a big deal, and it’s a great way to not get Speedweeks started but get to Victory Lane.”

Harvick also thanked his son, Keelan, for the four-leaf clover he found earlier in the week and Harvick placed in his No. 4 Chevrolet.

“I got that four-leaf clover in there, maybe it’s the lucky charm,” he said.

Byron, who started on the pole, remained out front the first 10 laps as most of the drivers remained in single-file.

On Lap 16, Tyler Reddick overshot his pit stall, came to a stop on pit road and then made his way into the stall to complete his stop.

Harvick took over the race lead on Lap 16 and was followed by Menard, Stenhouse, Truex and Daniel Suarez.

On Lap 26, Kyle Busch spun off Turn 2 while racing three-wide with Johnson and Tyler Reddick to bring out the race’s first caution. He appeared to have a flat right-front tire and was able to make his way to pit road.

“Tell him (Johnson I don’t want to (expletive) here it – that’s twice he has done the same thing in two races,” Busch said over his team radio.

Harvick led the way on the restart on Lap 30, followed by Menard and Stenhouse.

With 25 laps remaining in the race, Harvick held a small advantage over Stenhouse. They were followed by Menard, Truex and Buescher.

With 10 laps remaining, Harvick maintained his lead out front, followed by Stenhouse, Menard, Truex and Buescher.

Asked what he learned about his car in the race, Harvick said: "It handled good when we were behind cars. Last week taught us that we needed to have track position. They did a good job on pit road and got on and off pit road and then we had a couple Ford Mustangs behind us as well. Ricky and Paul worked with us and we were able to keep the track position and our cars were fast enough together to keep everyone else back there."