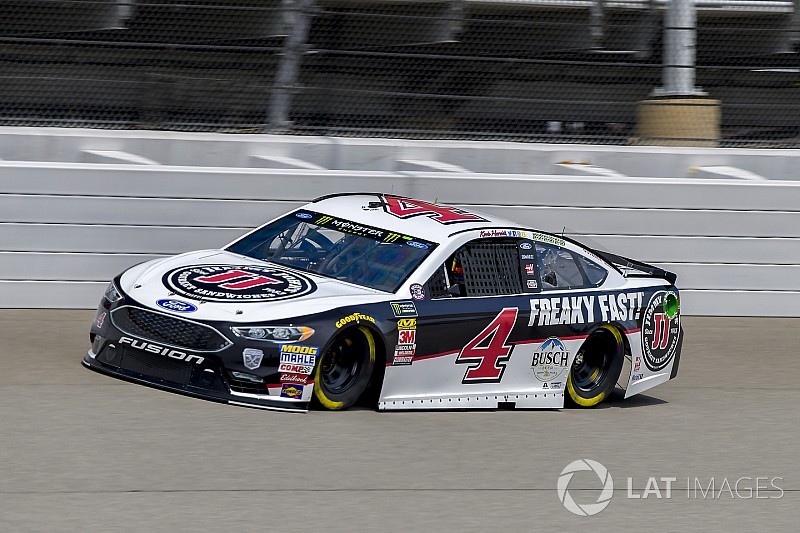 Kevin Harvick took the Stage 2 victory at Michigan as rain threatened to bring Sunday’s race to an early end.

During the break between Stages 1 and 2, most of the lead-lap cars elected to pit with Kasey Kahne and Austin Dillon the first two off pit road, with both taking only two new tires.

Stage 2 went to green on Lap 66 and Kahne was able to hold on the lead as Harvick moved into the second position.

Daniel Suarez and Paul Menard made contact off Turn 4 to bring out a caution on Lap 67. On the restart on Lap 71, Kahne led the way followed by Harvick and Blaney.

Harvick powered into the lead shortly after the restart as Bowyer moved into the second position and Kahne dropped to third.

With 40 laps to go in Stage 2, Harvick held a slight advantage over Bowyer, followed by Keselowski, Blaney and Joey Logano.

On Lap 86, Kyle Larson spun off Turn 4 and plowed into the infield grass, which did significant damage to his No. 42 Chevrolet. Larson had won the last three Cup series races at Michigan and that streak appeared to be over.

“I nosed it in pretty good,” Larson said over his team radio. “The splitter is probably (expletive). Sorry.”

During the caution, Harvick was the first off pit road taking on only two new tires but Menard remained on the track and took over the lead when the race returned to green on Lap 91.

Harvick quickly returned to the lead on the restart, powering past Menard on the bottom lane and Bowyer moved into third.

With 20 laps remaining in the stage and rain threatening again, Harvick pulled out to more than a 2-second lead over Bowyer.