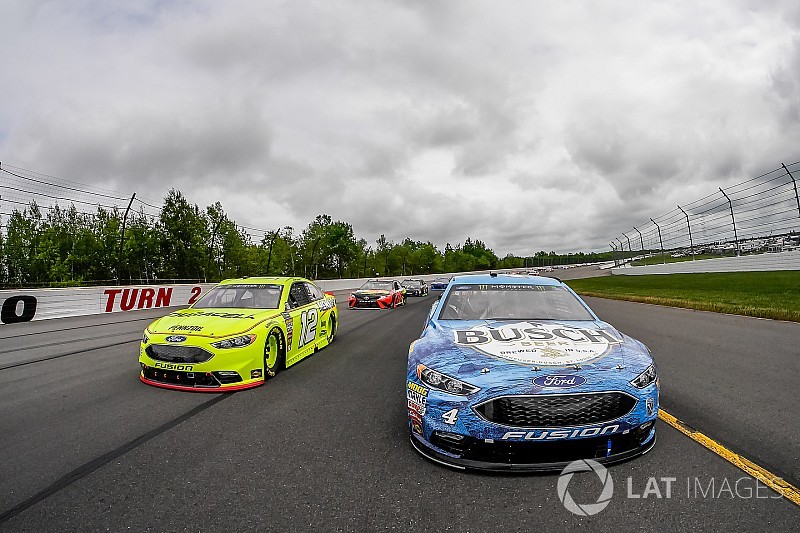 Despite being one of the strongest cars all day at Pocono, Kevin Harvick finished fourth after leading a race-high 89 laps in Sunday’s Pocono 400.

After going through a challenging time at Charlotte, Kevin Harvick and crew chief Rodney Childers showed veteran poise rebounding to lead much of Sunday’s race but the loss of track position after a late pit stop hindered his chances for a sixth NASCAR Cup Series win of the season.

Harvick came out second to Kyle Busch during a round of pit stops during a Lap 125 caution caused by a spin by Derrike Cope.

During the caution Martin Truex Jr., Harvick and two others stayed out while the rest of the field took two or four new tires. Truex, on older tires, never relinquished his lead while Harvick finished fourth.

“We just didn’t come out (of pit road) first,” said Harvick. “We just lost our track position of being in the lead and lost control of the race. That is what did us in there.

“We restarted second and then third and lost a spot on each restart as you start on the inside. Our Busch Ford was really fast and the guys did a really great job. When you are racing (Kyle Busch) and (Truex) you are splitting hairs and they were just better than us on pit road today.”

The top groove appeared to be the preferred restart lane the entire race and Harvick was caught on the inside line on the final two restarts that contributed to him falling out of contention for the win.

“Really, not pitting or pitting didn’t really seem to matter,” said Harvick. “We lost control to (Busch) and wound up losing a couple more spots on the restart starting on the inside, and that was the end of the day.”

Harvick seemed to be better on long runs and three cautions in the final 20 laps didn’t help his cause.

“I mean, just with all the restarts and everything and everybody sitting there cooling their tires off, I think everything kind of evened out (at the end of the race),” he said.