Busch, who started the 160-lap, 400-mile event from the sixth position in his Furniture Row/Beautyrest Chevrolet, ran consistently in the top 10 until the late stages of the race at the famed Brickyard. 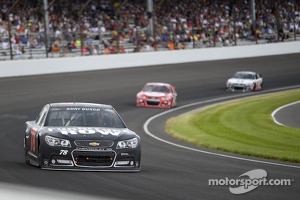 “The 14th-place finish is unacceptable,” said Busch. “We were strong in practice but had trouble in the race running in traffic. The car was loose and didn’t have the grip at the end that was needed on this track. We couldn’t close the deal today and that is very disappointing.

We’ve accomplished a lot this season, but one area we need to improve upon is finishing stronger. I am confident that we'll get better. This Furniture Row team has a great work ethic and is committed to keep on improving.”

Busch remained 14th in the driver point standings but lost some ground in his quest of making the Chase, NASCAR’s 10-race playoff for the Sprint Cup championship.

“No question we have to run better than we did today if we want to get into the top-10,” said Busch. “We are definitely capable of making it happen, but we need to be mistake free and have strong finishes in the next six races.”

The race had 20 lead changes among 12 drivers and there were three cautions for 14 laps.

The next Sprint Cup Series race is Sunday, Aug. 4 at Pocono Raceway in Long Pond, Pa.