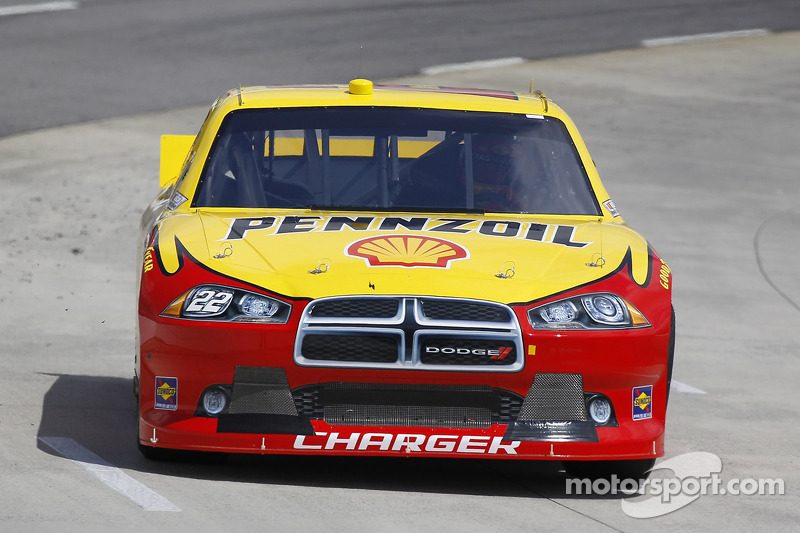 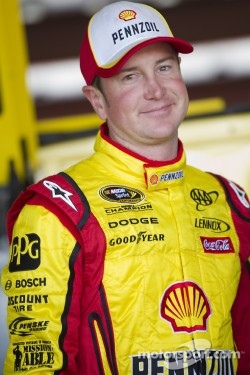 CAN YOU TALK ABOUT YOUR EVENTFUL PRACTICE TODAY? “We ended up blowing a right-front tire that sent us straight into the fence on the last lap of practice. It’s funny how things work out sometimes with the way that this week has gone. It’s been a productive week. There’s been a lot of movement behind the scenes with re-structuring, moving some things around and getting a general idea what some of the actual issues are instead of just talking about them; we’re acting to it. Just a tough day. We had a great plan in place to go out there early in practice and post a lap that put us third overall. If qualifying got rained out we’d be third on the grid. With a back-up car, we have to go to the back and dig our way out of that hole from there. No holes were (not) use to getting out of and digging.”

CAN YOU TALK ABOUT RACING AT DARLINGTON? “I love Darlington. With the great finish with Ricky Craven here, I’ll never forget that. I still think that the more that I tell that story, I’ll have a chance at winning one day. I finished second by two-thousandths of a second, that’s the way it goes. I finished in the top-five here last year with a third-place run. It depends. You get the different phases with different chassis or with the way that the body is and just the general competitiveness of the car. You hope that you get a solid finish every time out.”

CAN YOU TALK ABOUT THE TIRE TEST AT INDY? “It was an interesting tire test to say the least. We got rained out the first morning, got on the track about 1:30 p.m. on the first day and then we broke a motor two hours into it. Just all kinds of shots that we’ve been taking left and right. For Goodyear, the way that the combination went was there were a set of tires and a set of runs that we did, so we did four total runs of eight laps each. We saw cords right away and then developed into some other scenarios they wanted to try and did 15 lap runs and didn’t have problems. So now, it’s just a matter of them going back through the information. I think all of the drivers did all that they could to give feedback. There wasn’t just one specific tire that jumped out at us that said, ‘hey, pick me.’ It’s a matter of going through and filtering the information. Reading about how we’ve solved the tire issues, I don’t know. It’s just a matter of that track is diamond cut. It really chews up tires fast and it’s up to Goodyear to choose the right tire. We gave them all the information that we could with the teams that were there, so we hope for the best.”

CAN YOU ELABORATE ON THE CHANGES AT PENSKE THAT YOU ALLUDED TO EARLIER? “I feel like we’ve made great adjustments with what we’re doing internally and that’s to better understand how to build a better car. There’s been great feedback and everybody’s listening. Yeah, it wasn’t the best forum to go out there on Saturday night and talk about things. We’ve just, in my mind, seen things deteriorate and I’ve held it in, held it in and it wasn’t the right spot to do so. Now that people are listening, I think that we’re going to do some good strides and try to advance it. We need Brad Keselowski up there in the top 10 in points with us. That’s what we need; we need the cars more competitive and I think that we know that. Crossing the line and singling one person out, we’ll he’s the one person that’s got us in this position and it’s up to all of us to make sure that we’re better at the end of the day.”

There’s always been an open door policy to talk with Roger (Penske) and he’s always open to listening for what needs to happen.

DID YOU FEEL LIKE YOU COULDN’T GO KNOCK ON A DOOR. IT SOUNDS LIKE YOU DIDN’T FEEL COMFORATABLE GOING TO SOMEONE WITHIN PENSKE? “There’s always been an open door policy to talk with Roger (Penske) and he’s always open to listening for what needs to happen. Things happen slowly sometimes. When you see things from the cockpit, you notice how fast things go and where you’re struggling. If it’s a common theme and yet you continue to knock on the same door and nothing is happening, then there are issues. We need to put egos aside. For me, I’m willing to talk to anybody or listen to what happen. I feel like we have a great forum now with the way things have been opened up this week. It’s just not being pushed under a rug now.”

YOU’RE A FAN OF OTHER SPORTS. WHAT DIFFERENTIATES THE SPRINT ALL-STAR RACE FROM OTHER SPORTS? “The atmosphere is just as electric as it is at other sporting venues in other professional sports. What’s fun for us is that everybody is there. It’s just not a group of specific all-stars. Everybody has a chance to be in the race. At the same time, what sets it apart is that there are no points. At the end of the day, there is a winner. It does mean something. With the Pro Bowl, it’s an all-expense paid trip, so to speak, to Hawaii to enjoy the end of the season. With the NBA all-star game, it happens right in the middle of their season and who wins, East of West, it doesn’t matter. With Major League Baseball, you have the win, now that American League team or National (League) team gets home field advantage for the World Series. There’s the fun part of winning (the Sprint All-Star Race), of course the cash is key when you’re out there racing for no points. At the same time, you get the experimental value of learning something new with the team and if you wad the race car up and walk away, you can laugh at it. Whereas, at the Coke 600, you wad the car up you feel like you’ve lost all those points and you’re digging out of a hole.”

CAN YOU TALK ABOUT SOME OF THE YOUNG GUYS STRUGGLING TO GET RIDES AS COMPARED TO WHEN YOU AND KYLE CAME INTO THE SPORT? “I think that the way it was 10- to 12-years ago, there were rides out there with quality sponsors looking for those young drivers with all the potential in front of them. Drivers were thrown into some rides and expected to swim with the sharks. If you could swim, you’d made it. If you didn’t, you really don’t hear their names anymore. I had a rookie class of five rookies and now we really struggle to find the rookies out there. A guy like Kevin Harvick was Rookie of the Year my (first) year. I finished second in the Rookie of the Year standings. We had guys like Ron Hornaday, Casey Atwood, Andy Houston, so half the field, you know, of those rookies, half you don’t even know those names anymore. Now, it’s tough for new guys to get in because there’s not the quality rides available. There aren’t teams willing to take the risk of putting them in there because there’s not the funding coming in like there was before.”

DID IT TAKE SATURDAY NIGHT FOR PEOPLE AT PENSKE TO FINALLY LISTEN? WOULD IT BE INACURATE TO SAY THAT YOU’VE BEEN CARRYING THE CAR THIS SEASON? “There’s times when things are absorbed and times when I think that things are just bounced off the wall and I have to continue to shovel it back in there. We know we can be a better team. Communication is what does that. That’s what I preach when I get a chance to go talk to different college teams or high school events to pump people up. It’s all about communication. To say that I’ve been carrying the car, I’m doing the best that I possibly can. I want to win. I don’t want to finish 15th or 22nd like I did last week and say that we did our best. No, we didn’t because we would have got a top-five or had a chance at winning. For me, Brad (Keselowski) hasn’t beaten me all that much at Penske. I didn’t get beat all that much by (David) Stremme. I didn’t get beat much by Sam (Hornish Jr.). The last time that I felt equivalent was when (Ryan) Newman was there and that was in 2007.” 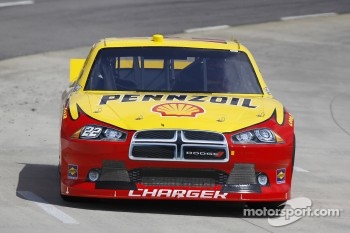 DO YOU FEEL THE LAST FEW RACES LEADING UP TO THE CHASE WILL BE CRAZY WITH GUYS OUT OF THE TOP 12 TRYING TO GET A WIN TO GET IN? “Absolutely. Right now, consistency get’s you in and those wins will get you in. A guy like (Kevin) Harvick with two wins this year is almost guaranteed a spot for the Chase. You’ll have those teams with one win or teams with multiple wins, but then you’ll have maybe two or three guys in the top 10 that might not have a win yet and sitting there in the hot seat trying to get in. Fuel mileage gambles, taking two tires, you name it, they’ll be stretching themselves thin to pick up that “W” to get a Chase birth.”

WITH THE PROBLEMS YOU’VE TALKED ABOUT, IS IT FRUSTRATING KNOWING THAT YOU CAN RUN MUCH BETTER? “We won the All-Star race and the (Coca-Cola) 600 last May and once July came, it seemed like we struggled. And there was a new chassis design toward the latter part of the season and that’s where we struggled. I voiced my opinion then. I felt like we might have missed it on this chassis design and that we might have to look back at things and circle around. When you have communication and it’s there, it works. When there is just hard-headiness, it doesn’t work sometimes. For me, it’s understanding. If you could go back and research some of those races you’d find out, we didn’t run in the top 15. We were scrambling to get into that top 15. Just like at Texas this year, we finished 10th because we were off-sequence. We didn’t run in the top 15 all day. We haven’t run in the top 15 in quite some time. When you see the writing on the wall, that’s’ when you can talk about it. When you’re sixth in points, it’s because our worse finish this year is 22nd. I’ve managed to dodge wrecks, bounce off walls, have bad pits stops or miss the setup and still come away with what you would call a salvageable finish. That’s what keeps you up there in points. When you’re leading the points six weeks ago and find yourself sixth in points now, that’s one spot a week that you’re losing.”

ON THE PENSKE RE-STRUCTURING, WERE PEOPLE MOVED AROUND? “Things have been talked about with Roger (Penske), Walt (Czarnecki), Bud Denker, Jonathan Gibson, Tim Cindric, Tom German, all the top people are involved. There’s no re-structuring with people in positions, but this week at the race track, I’ve seem four engineers that I haven’t seen at the track ever. I see them at the shop, but they’re at the track now.”