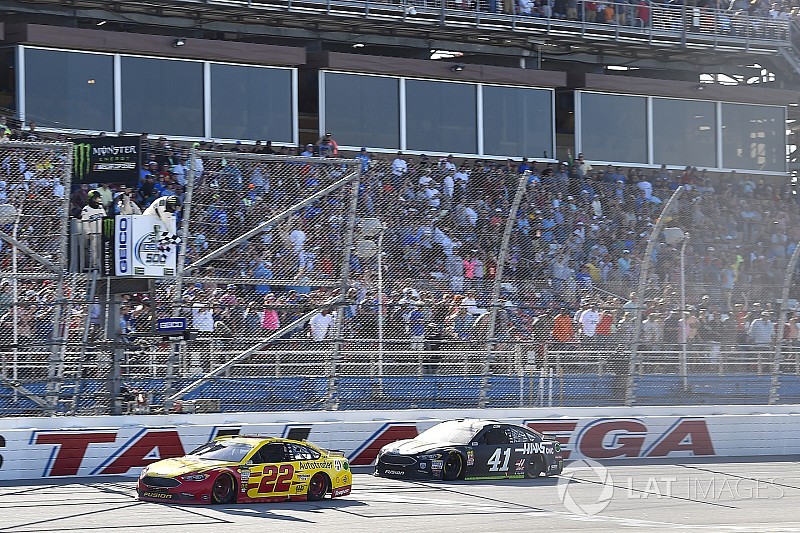 Kurt Busch was frustrated at the end of the race despite scoring his first top-five finish of the season at Talladega (Ala.) Superspeedway.

Despite only scoring one of his 29 Monster Energy NASCAR Cup Series victories on a restrictor-plate track -  winning the Daytona 500 last season - Kurt Busch is one of the best performers in superspeedway races.

So, it’s easy to understand why he was frustrated a little coming home second on Sunday after running on the top three much of the final stage of the race.

“I just got out-foxed,” said Busch. “I didn’t quite make the right move and it’s a shame as it was one of the best Fords I’ve ever had.”

Busch was running third with Stewart-Haas Racing teammate Kevin Harvick second behind eventual winner Joey Logano with two laps remaining when Busch elected to try a move to the front.

“I thought two Stewart‑Haas cars running second and third should have been able to pull this off,” said Busch. “(Ricky) Stenhouse came up from behind and tried to make some moves. Nine times out of 10 (Stenhouse) is statistically is going to be the guy to beat at a plate race.

“Once he got to my rear bumper the one time and pushed me by Kevin, he didn't get to stay with me. I lost track of him. Everybody from Chase (Elliott) and Stenhouse, everybody is back there three‑wide ripping and gouging, trying to go hard.

“It takes two cars to try to break through the leader. I'm happy that a Ford won. It wasn't the right one.”

Busch had planned on staying with Harvick and making his move with one to go but it didn’t work out that way when he lost the momentum from Stenhouse’s push.

“Kevin was in good position,” said Busch. “I was going to roll with him in any direction that I could. We just got broken up by Stenhouse. Man, it's just so close. You wish you could go over and do it again. I feel like I left that one out on the table.

“If I had to do it all over again, I just needed to manage the run that (Stenhouse) had on me because when we stayed single file, (Logano), (Harvick) and I, we could lay down some good lap times and the others couldn't quite catch us.”