It came down to the last lap -- and even beyond -- to determine the inaugural NEXTEL Cup champion at Homestead-Miami Speedway. In the end, Kurt Busch drove the wheels off the No. 97 Roush Racing Ford to take fifth place and earn his first Cup ...

It came down to the last lap -- and even beyond -- to determine the inaugural NEXTEL Cup champion at Homestead-Miami Speedway. In the end, Kurt Busch drove the wheels off the No. 97 Roush Racing Ford to take fifth place and earn his first Cup championship. 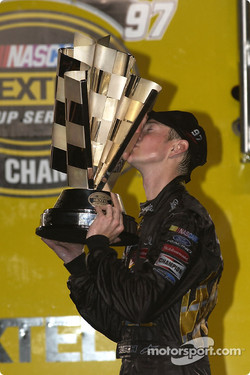 2004 champion Kurt Busch and the NASCAR NEXTEL Cup.
Photo by Autostock.
"Just unbelievable," said the 26-year-old Las Vegas native. "To be able to persevere how we did and overcome everything that we did, I cannot believe this team and everything we have been able to overcome this year. There are positions and times to be lucky and positions and times to stay focused and put together your best effort. It's a true testament to what a driver has to do, a team has to do, and team owner has to do."

Busch had nothing but bad luck all afternoon, but was able to remain calm and overcome adversity at every turn to stay alive in the championship fight. The first obstacle on his road to the Cup popped up at lap 91 when the right front wheel fell off the No. 97 Ford, sending him from second spot to 27th.

"I was in stitches those last few laps," Busch said. "I was just sick to my stomach. I had the whole world on my shoulders every lap today. To be able to cap off a great season, it's just wonderful."

Busch battled back to 19th after the wheel incident, but on a pit stop on lap 112, his crew looked baffled as crew chief Jimmy Fennig changed his mind mid-stop between taking four tires or two. The miscue resulted in an embarrassingly long stop that saw Busch restart 26th. 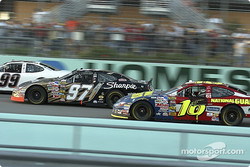 2004 NASCAR NEXTEL Cup champion Kurt Busch and race winner Greg Biffle.
Photo by Kurt Dahlstrom.
Busch chopped through the field and played with pit and fuel strategy to practically will the No. 97 Ford back into the top five by lap 199. From there all he had to do was stay within four spots of Jimmie Johnson and Jeff Gordon to assure himself the series title.

"I had the 24 in front of me and the 48 after that," said Busch of the race. "I was trying to do math in my head and I had all these things in my head. In turn four, I realized we had it and I was just overcome with emotion."

He finished the race fifth.

"Kurt is an incredible quick study, once he understands how something works he never forgets it," said team owner Jack Roush.

Johnson and Gordon pressed hard to gain spots on Busch, but in the end it was Busch's day to walk away with the sterling silver Tiffany & Co. trophy as the fourth-youngest driver in NASCAR history to win the championship.

Busch first emerged as a championship hopeful after the seventh race of the season at Texas when he left with the point lead. He would only lead for one race, before being at the top again after tying with Dale Earnhardt, Jr. after the first chase race in New Hampshire, which Busch won. 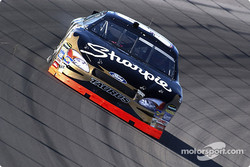 Kurt Busch.
Photo by Kurt Dahlstrom.
He forged on to lead all of the final eight races of the season.

Jamie McMurray pulled off the 11th-place finish for the season, earning the NASCAR bonus and grabbing a table at the NEXTEL Cup Series banquet.

The win by Busch makes it back-to-back championship wins for Roush Racing. Matt Kenseth, driver of the No. 17 Ford, was the 2003 series champion who earned Roush his first ever series crown.