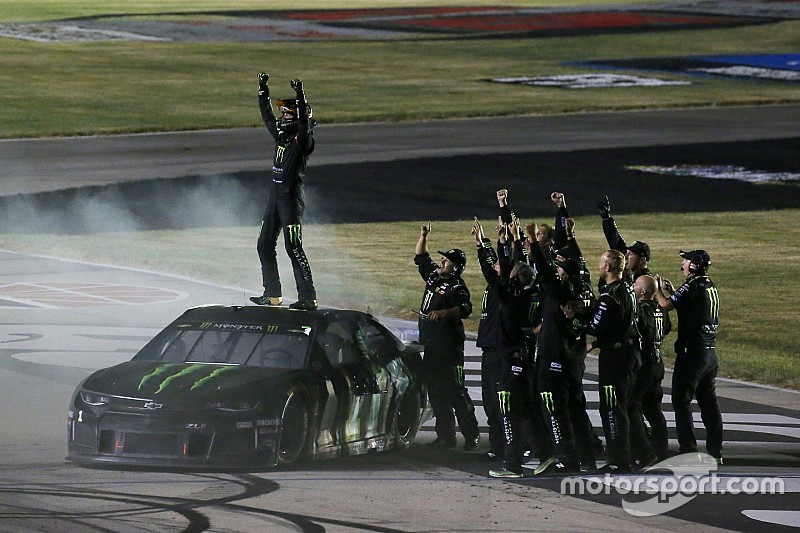 With smoke pouring from a tire rub, Kurt Busch out-dueled his younger brother, Kyle, on the final lap to win at Kentucky Speedway.

Kyle had grabbed the lead at the start of overtime, only to see Kurt get side-by-side and the two bang fenders before Kurt emerged off Turn 4 to win Saturday night’s Quaker State 400.

The win comes one week after Kurt Busch lost out on a chance to win at Daytona when his team elected to pit just before the race was to go green but was then red-flagged for lightning and eventually called for rain.

"Hell yeah! Hell yeah!" Busch screamed when asked about the last lap. "I'm proud (Kyle) gave me a little room on the outside. He could have clobbered us against the wall and he probably would have got it.

"What an awesome run. Whatever last week was, we got the 'W' now - whooo! That was epic. I was hopeful that we would get a shot, just one more restart. We got that yellow with my little brother, it's the best guy in the world to go race against."

Asked about his future as he only signed a one-year deal with Chip Ganassi Racing, Busch said: "I thought this year might be my last but we're having so much fun we'll have to see how things go."

The win is Kurt’s first of the season and his first with Chip Ganassi Racing. It’s the 31st of his career and first at Kentucky.

Busch said the wait for his first win of the season was more about "getting a new team up to speed."

"You've got a pit crew, aero, side-force. We've got to make mistakes to learn from those lessons. We've got guys like this right here, Chip Ganassi. You're in Victory Lane, buddy. Thank you so much. I told  you we'd make these guys winners.

"Thank you to everybody on this team back at the shop that works on this car and makes it the winning car that it is. We're going to have those days where things don't go right. Today things went right, and my little brother gave me just enough room.

Following the break between Stages 2 and 3, several lead-lap cars elected to pit but Bowyer remained on the track and took over the lead when the race returned to green on Lap 167. He was followed by Kurt Busch and Almirola.

After 170 laps, William Byron had moved up to the second position while Kurt Busch worked feverishly to fend off the advance of his brother, Kyle.

On Lap 179, Jimmie Johnson, while running seventh, got loose while racing Logano spun and hit the wall to bring out a caution.

Suarez received the free pass under the caution and returned to the lead lap. Kevin Harvick was penalized for an uncontrolled tire and had to restart from the rear of the field.

Only a handful of cars elected to pit under the caution. Bowyer led the way on the restart on Lap 185 followed by Byron, Aric Almirola, Kurt Busch and Kyle Busch.

Byron received a restart violation on the restart and was forced to make a pass-through penalty down pit road.

After 195 laps, Kurt Busch mounted a serious challenge to Bowyer for the lead but Bowyer was able to withstand the challenge and remain out front.

On Lap 205, Kurt Busch got around Bowyer for the lead just as Bowyer needed to make a scheduled stop for fuel and tires.

Kyle Busch moved back into the top spot when Kurt Busch dropped to pit road on Lap 213 to make his final stop for fuel.

Several more lead-lap cars began their final green-flag pit stop on Lap 217. Erik Jones elected for a two-tire pit stop that put him out ahead of Kurt Busch and Bowyer when he returned to the track. Kyle Busch and Logano pit on Lap 225.

Martin Truex Jr. was penalized for speeding during his stop and had to make a pass-through penalty under green.

Once the cycle of stops was completed on Lap 249, Logano emerged as the leader following a wild side-by-side battle with Kyle Busch. Jones ran in third.

With 15 laps remaining, Logano had moved out to a more than 1-second lead over Kyle Busch. Jones ran third, Kurt Busch was fourth and Hamlin fifth.

A caution was displayed on Lap 267 after Bubba Wallace spun through Turn 2 but was able to keep it off the wall.

Most of the lead-lap cars remained on the track with Suarez the first to pit. At the start of overtime, Logano led the way, followed by Kyle Busch, Jones Kurt Busch and Hamlin.

Kyle Busch: “I was going to plow the fence” without lifting