Kurt Busch looks for an exciting All-Star race at Charlotte

KURT BUSCH
Living Life to the Fullest on a Saturday Night 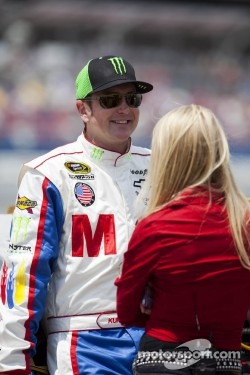 MOORESVILLE, N.C. (May 16, 2012) – “Hey now you’re an all-star, get your game on, go play. Hey now, you’re a rock star, get the show on, get paid. All that glitters is gold. Only shooting stars break the mold.” So goes the chorus of Smash Mouth’s popular 1999 song “All Star.” Many believe, when interpreted, the song means living life to the fullest and to strive to find the good in everything. That interpretation is an appropriate adaptation to the emotional aspects that go into an All-Star event. And All-Star events are never hard to find.

Major League Baseball has its annual All-Star break in mid-July, when baseball’s finest converge on one city for several days of festivities that celebrate the game of baseball. The National Basketball Association does the same thing in mid-February on an annual basis. All-Star games can even be found at the high school level as the region’s most talented gather annually for a chance to watch the “best of the best” compete.

NASCAR’s version of the All-Star event is this weekend in the backyard of many of the teams that compete in the Sprint Cup Series – Charlotte (N.C.) Motor Speedway. Saturday night’s Sprint All-Star Race is an annual dash for cash. If the interpretation of the song “All Star” is to be believed, what better night to live life to the fullest than when there is a $1 million-to-win event on the line. Driver Kurt Busch is well aware of the concept and goes into Saturday night’s All-Star Race as a former winner of the event.

With the All-Star Race being a non-points race, an anything-goes atmosphere permeates the track – an ideal situation for a group of drivers living life to the fullest one night under the lights.

KURT BUSCH, Driver of the No. 51 Phoenix Construction Services Chevrolet for Phoenix Racing:

“You’re just one of the top dogs and you’re going up against the best of the best. A couple of years ago, I hoisted the trophy they give you as the winner of the All-Star Race and that’s a nice check they give you. A million-dollar bonus and we have to thank Sprint for making that happen.”

Talk about what it means to be a competitor in the All-Star Race.

“The All-Star Race is an amazing event where you don’t have to think about points. You just think about the trophy and the cash prize at the end of the night. With Sprint jumping in years ago and offering up a million bucks for the winner, everybody gets excited about it. It used to be a race where, if you weren’t a top team, you would treat it like a test session to get ready for the big 600-miler the week after. Now, when you add in the cash prize with the prestige that goes into winning the All-Star Race, and the history that the event has generated over the years, you bring your best stuff. You want to be on your game and make sure you’re on top, getting that big trophy at the end of the night. It’s a big night to get pumped up and have that all-star atmosphere.”

How cool is it to be an All-Star winner?

“To win the All-Star race, it’s a full team effort. It’s the way the car is prepared, and you usually bring a special engine that has a little extra horsepower and a little less durability. Then, you’re thinking the same thing when you’re out on the track. You don’t really second-guess your options. You just go. You hammer down. It’s almost like you’re qualifying every lap of the race, except you’re digesting the other cars on the track. To beat the best of the best on one certain night like that night, it’s an amazing feeling. To be in the company of guys like Dale (Earnhardt) Sr., Jeff Gordon, Darrell Waltrip – the way that that race has made names. And then, if you take someone else out in that race, you can be a bad name for a long while. It’s a big stage to stand on in one night. And to hoist the trophy up when everything is over, well, then your name is in the history books as an All-Star winner.”

What is one of your favorite All-Star Race memories?

“It’s amazing how vivid everyone’s memories of the All-Star Race can be. The 600 – that’s a marathon, but this, for lack of a better explanation is a 100-yard dash. With the All-Star Race, you remember the pass in the grass with Dale Earnhardt and Bill Elliott. You remember the first race under the lights with Kyle Petty and Davey Allison battling to the line. Then you remember the years with Earnhardt winning or wrecking Darrell Waltrip. The race that kind of stands out in my mind is the one that gave us T-Rex. It was the night that Jeff Gordon just flat out dominated, and then this car called T-Rex is banned. The car had the Jurassic Park paint scheme and, after the fact, it gets called T-Rex. That was a Ray Evernham special and that was really just one race that year where that Hendrick car just dominated. To me, though, T-Rex and what happened after – that was a fun, memorable moment.”

As an All-Star Race winner, is there any kind of extra knowledge you’ve gained about what it takes to win?

“What’s amazing about the event is that you have to survive the first three-and-a-half segments. Then, in that last segment, you have to be in position to attack. That’s when you’re qualifying every lap and you’re leaving no ounce of speed on the racetrack. But, if you race that way the whole time, you end up wrecked. So, it’s a battle of using a little bit of restraint with that speed that you have in your car that you hope is there and makes you capable of winning.”

“It’s the last lap, you’re side-by-side with $1 million on the line – it’s hard to say. Kyle (Busch) and I’ve wrecked before and that wasn’t even the last lap. It’s a feeling that you can’t predict and you really can’t know how to forecast it, exactly. You give everything you have but you never want to step over the line and break that code, which is to wreck someone deliberately. You are going to give it all that you have and do it the best way you can and use the God-given talent you have. You’re using everything you’ve watched and learned that night and how you have to react. You never know what’s going to happen. But, with a million bucks on the line, we can get pretty stupid, sometimes.”

Tony Stewart always in for the All-Star Race